As the UK’s leading independent property investment specialists, North Property Group are experts in forecasting the next hotspots for city living. Finding the right balance between an attractive proposition for investors and ultimately, a sought after proposal for tenants has become their trademark. So for the latest project in their portfolio, the group found themselves in Burley, just outside Leeds city centre.

The site will become home to two buildings, collectively boasting 110, one, two and three-bedroom apartments. Named Alexandra Park, the site is currently only marketable from architect’s plans, so the Group approached us to support in developing a suite of branded marketing materials that would appeal to London-based or overseas investor audiences.

The key messaging and the accompanying brochure needed to focus on not only selling the complex, but also the surrounding area of Leeds. With the area set to follow in the footsteps of Manchester’s MediaCityUK, with media companies such as ITV Yorkshire and Radio Aire having relocated nearby, the reinvention of the area looks imminent. Balanced with the nearby Kirkstall Valley Nature Reserve and its proximity to University campuses, the plot based in the so-called ‘Knowledge Quarter’, is expected to reap yields of 8%, much higher than its London equivalent.

We began by auditing the plot’s surroundings, covering nearby landmarks and local attractions. It was clear from the client that the location of the building should be the focus for the core messaging when marketing the property, so we were keen that the branding needed to be rooted there too. This led us to creating a ‘best of both worlds’ proposition that drew upon the close links to the city and the greenery that surrounds the local area. Our focus was to communicate youthful city living, that also offered a doorstep to nature and an escape from concrete and traffic jams come the weekend. Although the client agreed this would be a clear pull for the end tenants of the building, they felt that for investors the branding needed to also lean clearly towards the strength of Leeds as an investable city.

Taking feedback on board, we chose instead to embed local landmarks like the neighbouring viaduct and river into the creative outputs and then left room for the rest of the focus to be on the city’s infrastructure. For the brochure, it was clear that look and feel had scope to be more vibrant and dynamic than the usual investment literature, aligned to a city with a growing youth population. To do this, we manipulated photographic images of local landmarks to be used within the document, taking on an illustrative quality suitable for the audience.

The selected typography, Domaine Display, subtly played into the lively nature of the brochure and balanced well with the colour palette that was again woven through for a more vibrant effect. Balanced against this, it was important that the pages were readable as a no-nonsense factual sell, drawing in investors by highlighting the key stats of the property. It was with the overall design that we were able to achieve this, making sure that USPs were clear, concise and persuasive, and not lost against creative elements.

We also designed and built the lead generative website for investors that would host the downloadable brochure. We needed to ensure that the online and offline elements of the project were consistent, and so we incorporated the manipulated backgrounds taken from the literature, linking the two together but without duplication. 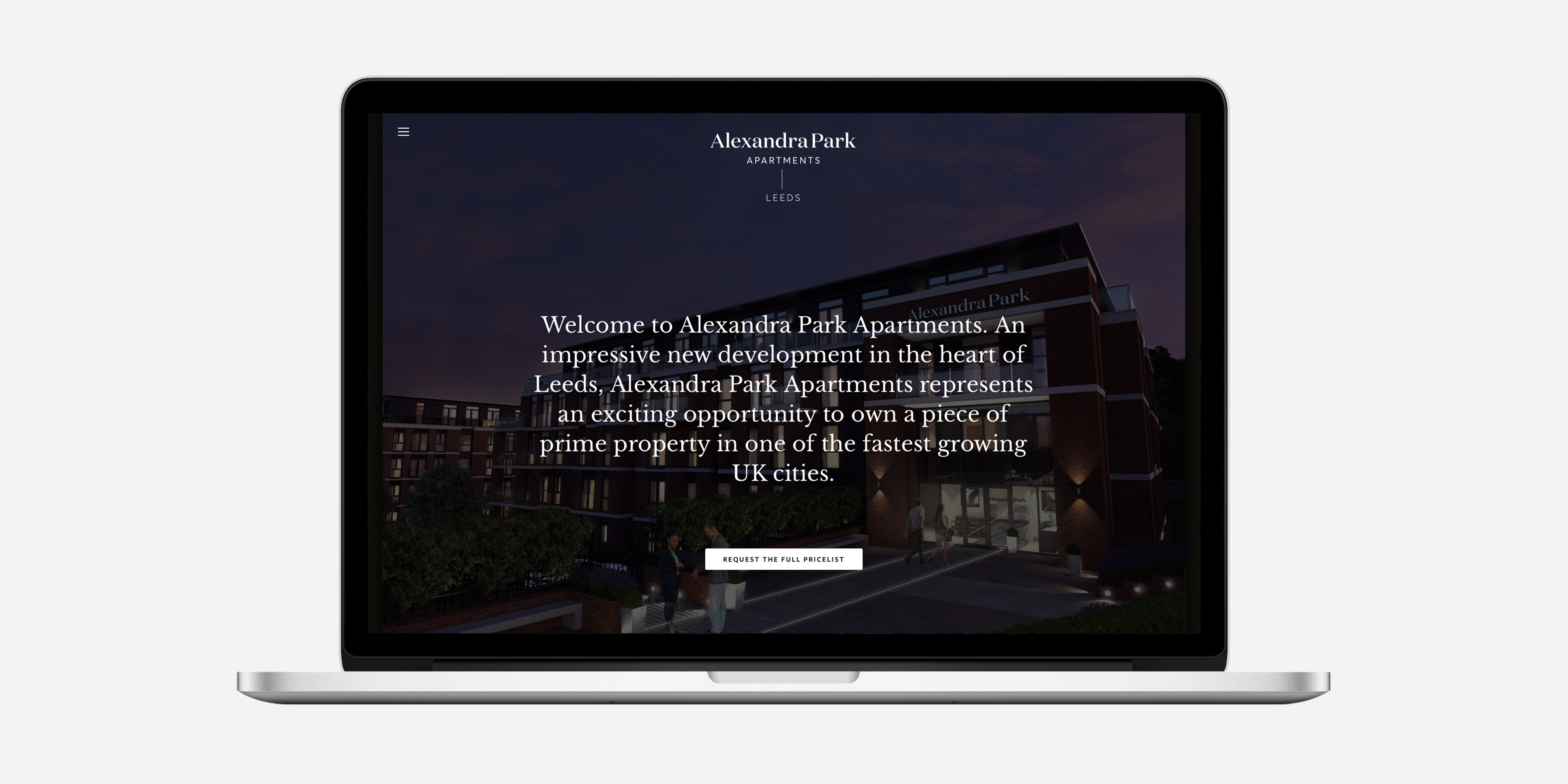 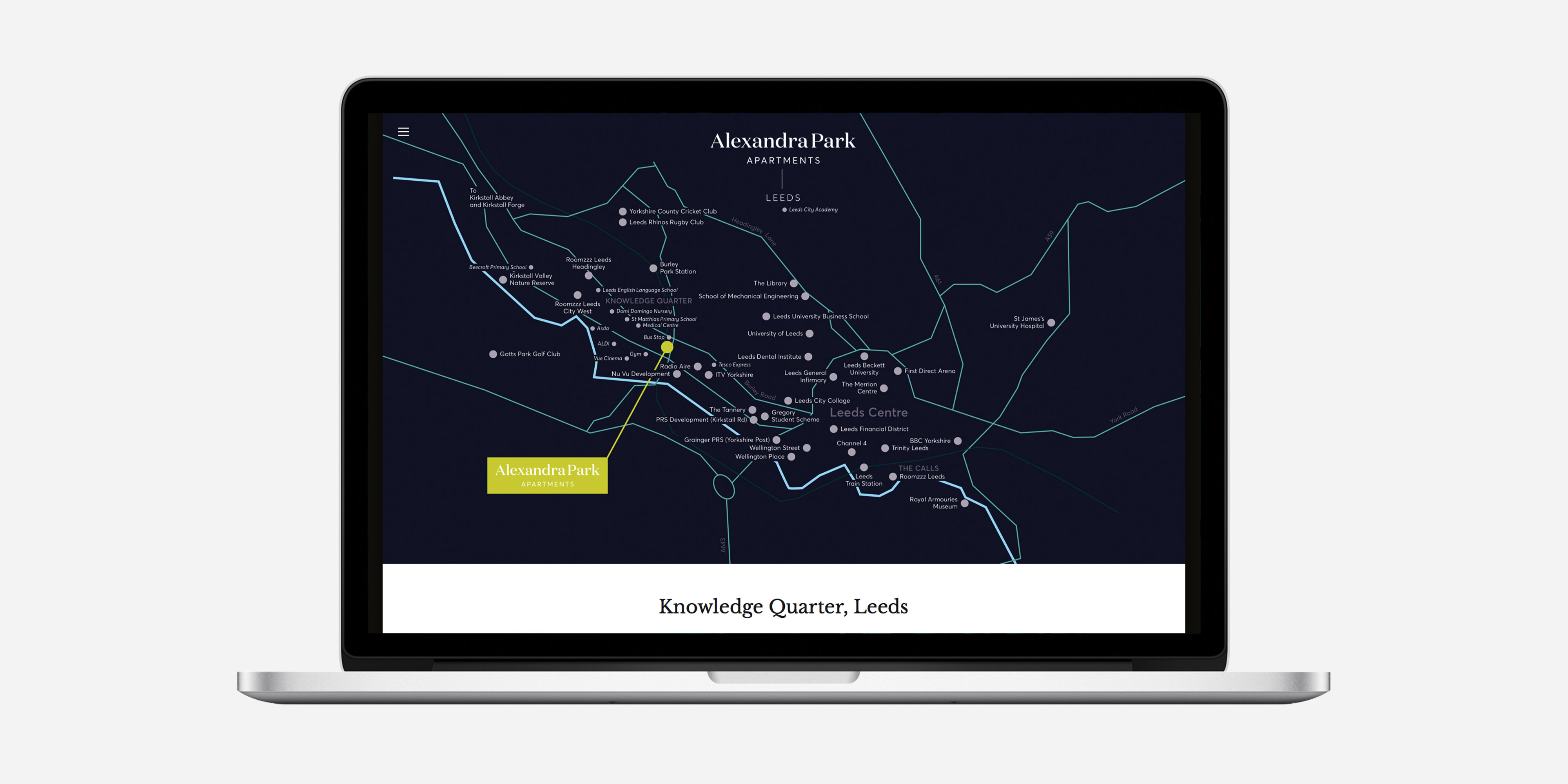 The materials have since been deployed as a lead generative tool and hosted on The North Property Group investor website. Since the site is still from plans, the purpose of the brochure should be to encourage enquiries from those looking to buy a number of units within the buildings. With the news that Channel 4 has plans to move to Leeds, sparking the beginning of a media hub within the city, Alexandra Park looks set to become a sound investment. 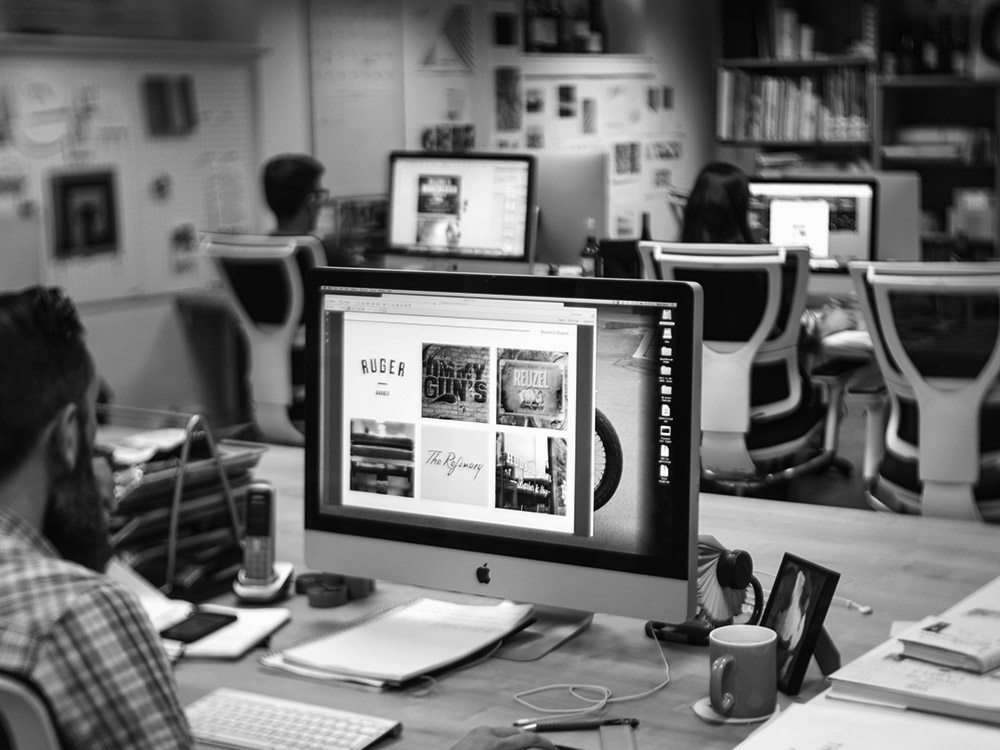 If you like what we did for North Property Group we could do something for you.