Many brands are now looking to recruit roles that 2 years ago didn’t really exist, those such as Attribution Managers. Hired to scrutinise media spend, join every dot in the digital conversion journey and make sure each creative output is tracked and accountable, it’s easy to begin to think the art of window-shopping marketing doesn’t quite fit the now, here-to-stay model.

That said, there aren’t many channels that can offer brands a reach of five million pairs of eyes, per day. According to TFL, the London Underground daily ferries five million passenger journeys around the Big Smoke. Commuters, city dwellers and culture seekers all use this iconic infrastructure to get from A to B.

So when working with our client Broadband Genie, an independent UK comparison service for home broadband who were looking to launch their first large scale advertising campaign, the Underground felt like the right place to do it. As a relatively unknown brand in a relatively over saturated market, Broadband Genie’s main objective was increasing awareness of their services to a large audience.

Working with our media partner Rock Soup Media who secured the prime advertising space at stations including Euston, Kings Cross and Old Street, we needed to ensure that the campaign was a simple, yet persuasive.  What we didn’t want to do was simply remind people to switch broadband and go away and search for that. Instead we needed the creative to resonate with consumers, putting Broadband Genie on the map of their mental to-do list. So that when they pick up their device to make the switch, it’s the brand they search for and not the query.

It was in achieving fluidity between offline and online behavior that made it important for us to take a scientific approach to the branding of the campaign. Starting with search based pain points, such as ‘Why is my broadband so slow’, ‘Why is my broadband so expensive’, we were able to build a picture of what the consumer is looking for in a comparison site. It’s not just about switching, but also about the reasons why people do or don’t make the switch. During the research, we began to understand that the pain points were also the triggers: Cheaper, faster, more reliable, easy to switch. These four concepts were the building blocks for the outputs of the campaign. 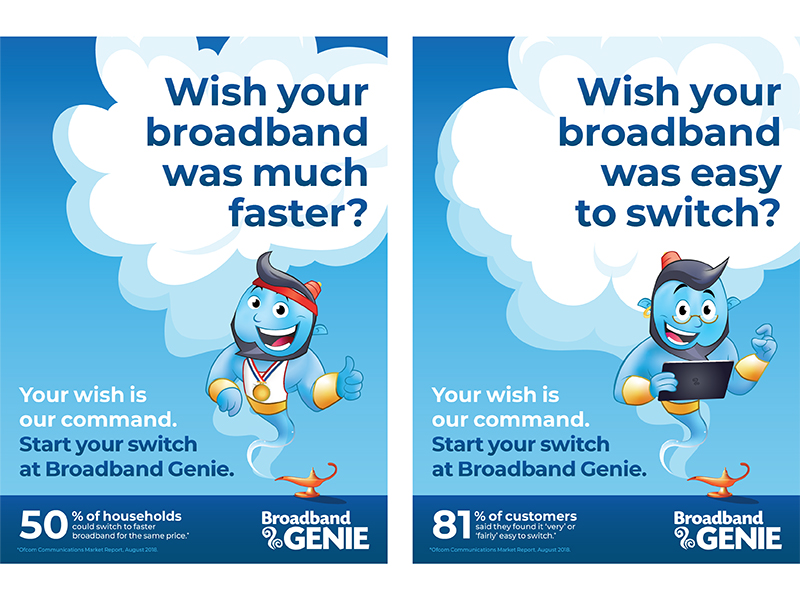 During the collaboration process between agency and client, Broadband Genie were clear with us that their front man, the genie, didn’t need to be changed or edited but instead that the campaign should fit around him. So that’s exactly what we did. Our designers brought to life the signature blue genie as a solution or answer to each of pain points that we identified during the research. Holding his piggy bank in the creative that promotes cheaper prices, and adorned in runners vest and gold medal for the faster speed poster, we made the genie visually represent the benefits of the brand. And when we could support the creative with Ofcom stats rather than just slogan taglines, even better. 50% of households could switch to faster broadband for the same price and 81% of customers said they found it ‘very’ or ‘fairly’ easy to switch; pretty hard to argue with that even for the hardened London commuter.

The 800-strong force of posters has since been distributed across central London. Since its launch Broadband Genie have reported an uplift in enquiries. This has shown us the changing nature in offline to online behaviour, and perhaps highlighted that we don’t have to track absolutely every click that a consumer takes to arrive at a purchase. Instead, in today’s tech savvy market, brands can afford to have some faith that if they provide the path, consumers will take it. They don’t need to be hand-held from one signpost to the next.

Outside of the concrete and tangible digital metrics though, it’s reminded us of the value of others such as Share of Voice and Brand Recall. A campaign like this one, shows offline is on its own a channel that can really etch a memory into minds.  Rewind 20 years and no industry expert would have questioned the impact that large-scale outdoor advertising could have, with brands competing for advertising retail. And for some, that certainty still exists. A survey conducted by Sappi found that 69% of 18 to 24-year-olds prefer print and paper communications in comparison to reading off screen. This explains some of the reason why perfume and beauty brands still continue fill the double page spreads of luxury fashion magazines, and you only need to look to the wealth of adverts that fill slots between prime-time sports showings to understand maybe offline isn’t dead at all, it’s just about being smarter, and better timed. It’s about knowing the audience you’re communicating to and making them remember your brand. 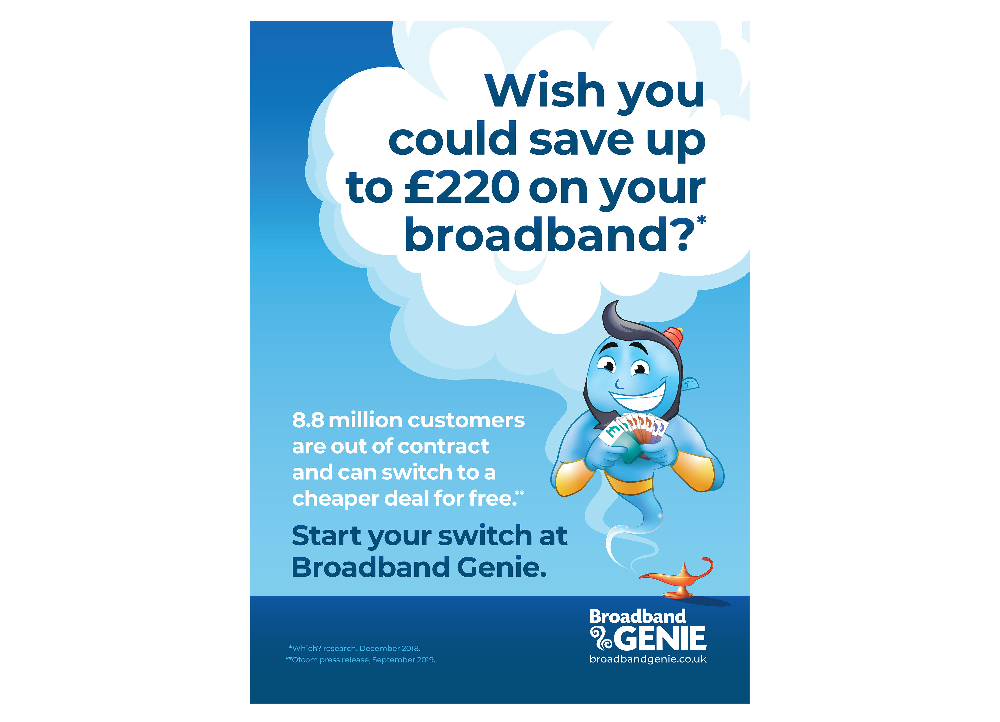 We worked with Broadband Genie on their Christmas campaign, taking with us learnings from phase one. As we continue to help move the brand forward, bridging the gap between online and offline marketing will be a key focus for us. But in trusting that clear brand identity and well-articulated product benefits will get the consumer from A to B, we’ll be nodding to their online journey rather than arm-flailing at it. So keep your eyes peeled for that little blue genie floating past on your commute home…

Need help with branding your next campaign? Find out how we can support.