Enter the 1910s. It’s a decade moulded by transition and tension, dominated by the first world war. A dark mark on the era, the war in Europe left its impression across most things, and art and design are no exception. Where there had once been the swirling curves of Art Nouveau, there were now harsher lines. Those floating fonts fell away to emboldened lettering, distinct and definitive, carrying the weight of authority and leadership, just like the tone of the time.

But that’s not to say the 1910s is a period lacking artistic expression, in fact, rather the opposite. With the onset of war and the rise of industrialisation came modern art movements, from revered artists whose reverberations continue to ripple through modern advertising campaigns. Cubism was born, characterised by works like Pablo Picasso’s Les Demoiselles D Avignon and architecture like Raymond Duchamp-Villon’s La Masion Cubiste. And Futurism, as portrayed in paintings like Giacomo Balla’s Abstract Speed + Sound and Umberto Boccioni’s The City Rises; and Constructivist art, which depicted the bold wording and stark geometry of Bolshevik Revolutionary war propaganda.

It wouldn’t take long before these various artistic moods amalgamated into one unified and internationally recognised style: Art Deco. And soon the bold lines and geometric shapes now synonymous with the style would begin to seep into consumerism, visible in the posters and publications designed purposely for selling products.

Wartime advertising campaigns, and those that would come after 1918 – were bold and structured. Shapes were integral to the design, as were borders and block colours. There was a point to things, instruction, and power behind the advert. Marketing campaigns of the era typically manifested in graphic design that reflected images of industry and technological prowess. Images such as colossal ocean liners and Lego-like skyscrapers, with sleek flat surfaces to emulate steel and chrome plating – the fabrics of industrial scale and military advancement. You only need to look to New York to see the poster boy of Art Deco, the Chrysler Building – a towering reflection of the modern American dream, something to aspire to, to look up to – literally. 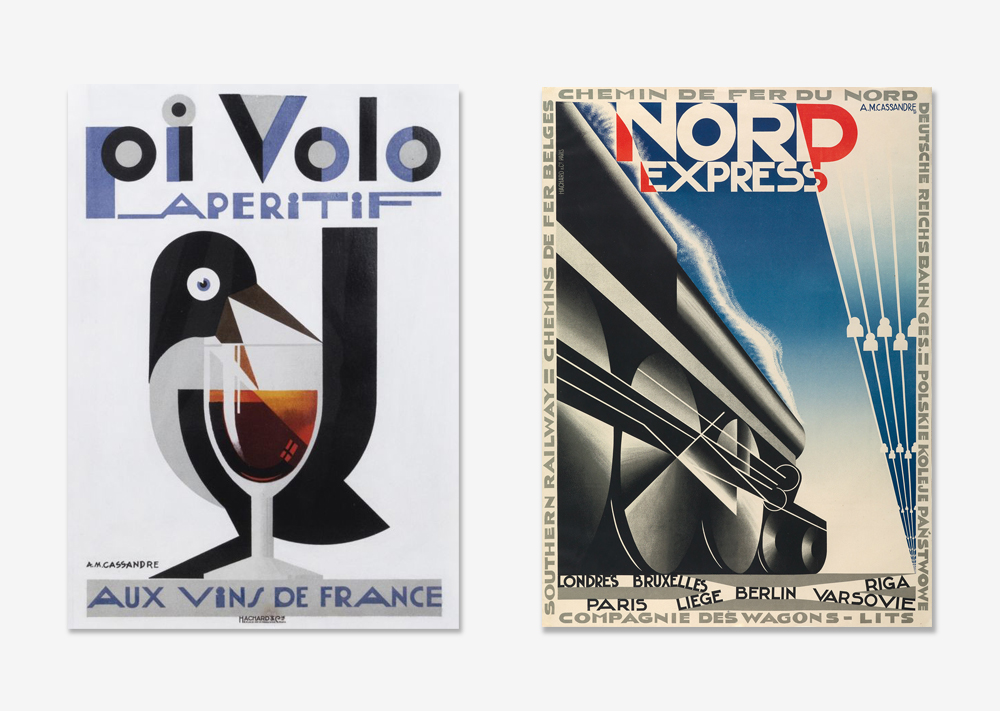 This aspirational quality to advertising design was a core part of how companies could convince their audiences. In a time of austerity, glamour and luxury offered some light relief. However mundane the product, however widely accessible and every day – companies would gear their marketing campaigns and branding creatives towards a plush, posh aesthetic. The typography was dynamic, and the pinups so glamourous and handsome, they appeared to have walked straight out of Fitzgerald’s Great Gatsby.

Take Lucky Strike cigarettes for example. A relatively standard consumer product made seamlessly sexy. Featuring a new angular, straight font, and a sultry couple enjoying a puff on what appears the world’s most elegant tobacco –companies were moving towards beauty and style. No longer was functionality the only requirement, now everything needed to be seen as having a certain desirable aesthetic too. 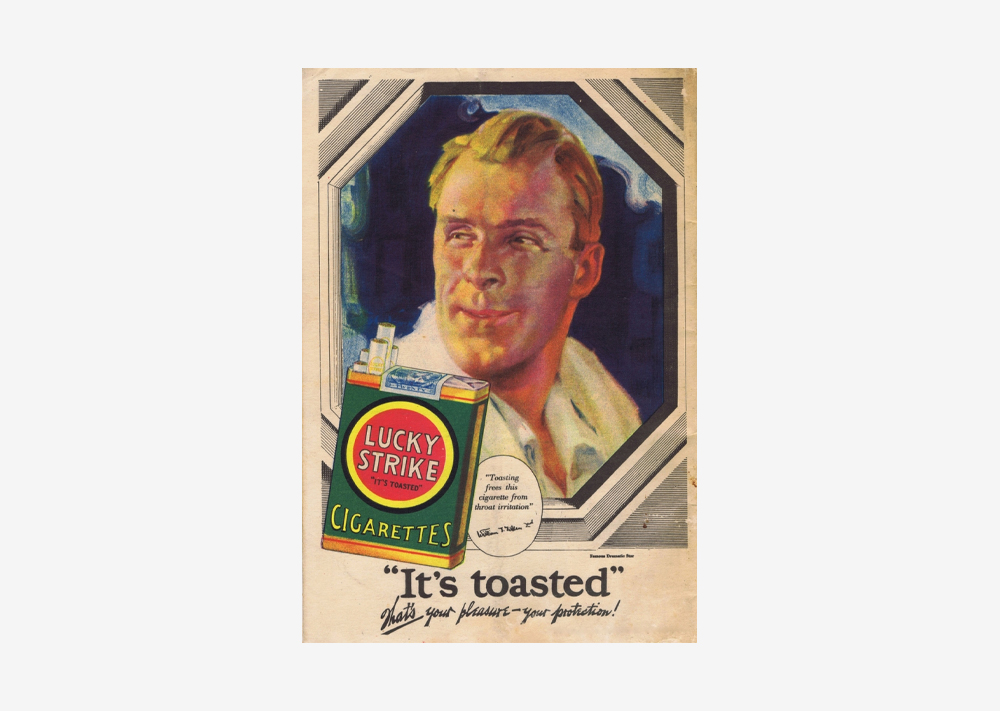 But what of today’s branding and advertising? How are those tall shapes of the Art Deco era still looming over product launches and creative assets in our time? Brands who choose to align their marketing and advertising creatives with the genre are making a conscious decision to give off tones of authority and splendid allure. It’s about desiring something and being included – as if owning a product instantaneously makes its owner more, moreeverything.

A brand that does this well is the premium cognac producer, Noir King. Opting for the quintessential Art Deco colour pallet of black and gold, Noir King is a real top-notch lesson in this kind of branding. The font is sharp and upright, as though the text itself is standing to attention. The label is bordered in gold geometric shapes, and the ‘Drink Like a King’ slogan again alludes to how the consumption of a product can offer social elevation. It’s a promise of better and the offer of exclusivity. Noir King is so closely aligned to the design and creative style of Art Deco that the bottle itself is modelled on the architecture of the era. Tall, angular, it’s the Chrysler of drinks cabinets all over the world – one very much at home in the speakeasy too. 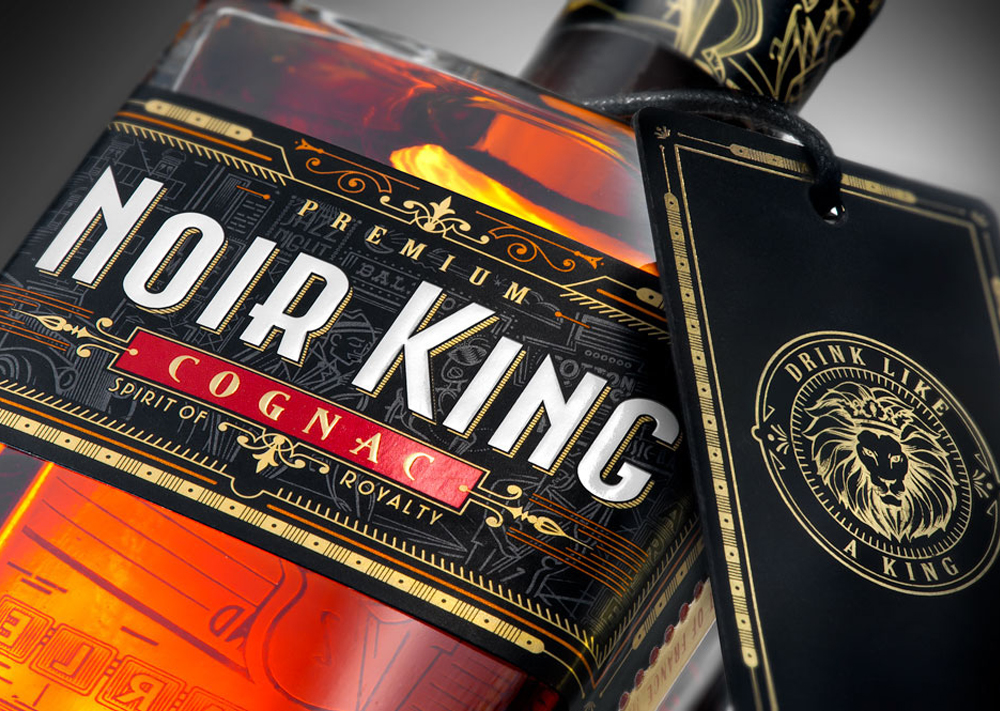 As an established creative branding agency in Manchester, the team here at Glorious have helped many a brand take on the Art Deco aesthetic. One such client is the internationally respected, Sense of Place, who approached us to collaborate on creating highly distinctive and effective wine labels.

As with most creative branding, it was felt especially important that the designs communicated the story of each individual bottle of wine. Whether it’s new, modern, innovative, or steeped in heritage and tradition, the job of a wine label should be to communicate the narrative of the wine itself and the vineyard behind the bottle. So that whether it’s sat on a wine shelf inside someone’s home, or has become the eye-candy of a restaurant wine cellar, the label design must be reflective of what’s in the bottle – luring in its prospective drinkers.

Unsurprisingly, a few of the bottles we’ve designed for felt distinctly Art Deco in their personality. A classic Pinot Noir and a golden crisp prosecco could have their flavours brought to life with a creative branding that typifies the era. Golds, blacks, and greens were all adopted as part of the colour pallet, and geometric shapes and strong fonts were featured in these drinks labels. Once stuck onto the glass bottles, we were certain we’d opted for the right design approach – a label as delicious as the drinkable delights corked inside. 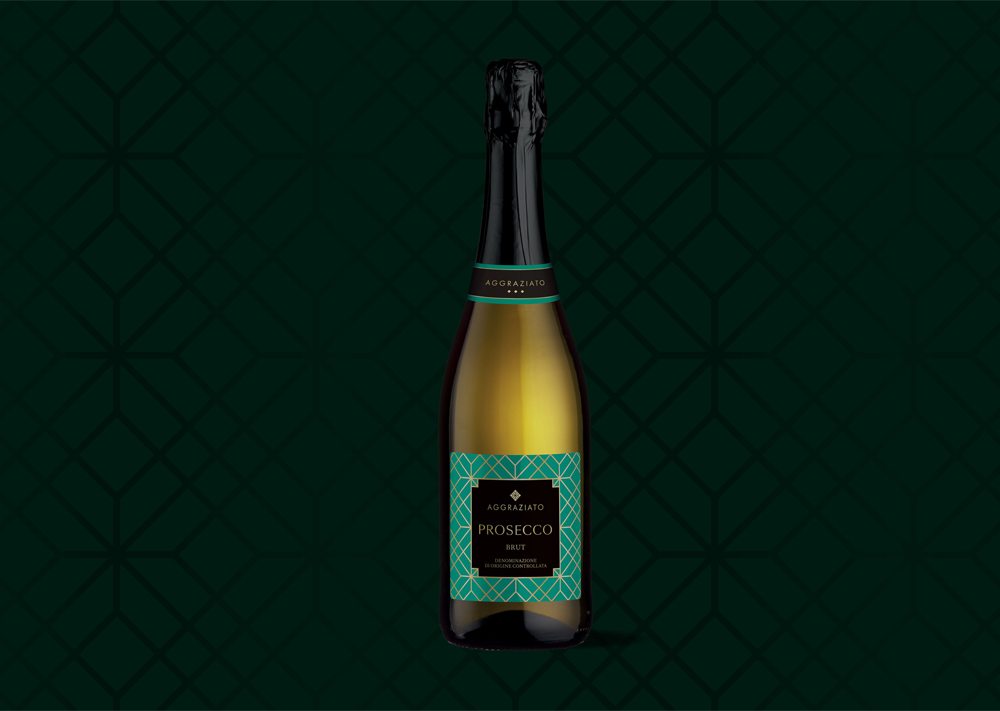 So, if all this talk of sophistication, speakeasies and structure have left you wanting to align your business branding with the Art Deco style, here’s our guide to doing just that:

Colour pallet is of particular importance when it comes to branding aligned with Art Deco. Colours should be opulent and lavish, exuding that gilded look and feel. Think gold, black and green – and forget more modern hues such as ombre pinks and tie-dyed yellows.

Art Deco graphic design should appeal to the senses. Its allure is all about being desirable. Remember that this style was born in a time of austerity when offering light relief was an important factor. Think about glamorizing your product – even if you’re selling air freshener, it should feel like the world’s most exclusive perfume – something to transform a room from bedroom to boudoir.

The typography used in Art Deco’s creative graphic design should be angular, upright, and structured. We left the swirling curls of Art Nouveau behind us in the last decade. As a reference point, think about the architecture that dominates the era. New York’s booming skyline – that’s how these fonts should feel too.

The inclusion of borders is a common feature of Art Deco art and design. They emphasise the point, emboldening the branding to stand out – to make people take notice. It’s also a way of adding more geometric shapes and outlines to a design too, taking you further into the typical style of the era.

Illustration and imagery need to be carefully considered when going all-out Art Deco. Not only should the imagery be sultry and alluring, but they should also be commanding, drawn in thick black lines to command the page. Think back to those ocean liners, or the propaganda posters of the 1910s – it’s about having conviction, to

Need help getting bringing your brand identity to life?
Find out how we can support.