Enter the 1900s. The turn of the century and the dawn of a new era. Revolution was in the air, modernity, change – the feeling of doing things differently. Society was driving forward. Art, theatre, fashion, and culture were all to be reinvented, rather than just reworked. There was an energy in the air that was catching, to make your own mark, march to the beat of your own drum – and most importantly, to seize the day.

All of this gave way to an attitude that the industrial humdrum of the 1800s hadn’t really had time for. Ordinary people began to aspire and desire in a way they hadn’t before. To possess material things for their beauty, rather than simply their function. Posters began to adorn the streets, to compete for attention amongst their new adoring audience. Marketing could tap into feeling, sell to the person who wanted to obtain, be a part of something new.

So just like the brands of today – businesses around in the 1900s quickly became aware that if they were to be successful in making a profit, then they ought to swiftly don a style that spoke to this new vogue. And channelling their creative branding into the artistic style of the time felt the right way to do it. Welcome, Art Nouveau. Quite literally – New Art.

Art Nouveau is an ornamental style of illustration and design characterised by use of a long, sinuous, organic line. Akin to the society in which it was born in, Art Nouveau was a deliberate attempt to create a new style, free of the imitative historicism that dominated much of 19th-century. And when it began appearing in the intricate swirls, flowing lines and floral backgrounds of William Morris, Vincent van Gogh and Paul Gauguin, it wouldn’t take long before its influence would be felt off the canvas too. Art Nouveau was about to become art by the people, for the people.

Depicting dreamlike imagery that represented the notion of thinking beyond the mould, Art Nouveau illustrated a time of new thoughts and new ideas. It was part of helping people connect the dots, to visualise what life could be like. Consider this in the context of advertising, and you quickly begin so see why Art Nouveau remains a key style for creative and visual branding in the 21st century.

So without further ado, let’s unpick what exactly it is that typifies Art Nouveau creative advertising, how is it done well – and who the key players who are working to keep the style alive and well in today’s market.

When taking a closer look at our subject, an aspect that can’t be ignored is the sexual awakening that is reflected in the style of Art Nouveau. Women were often sexualised and shown with a sense of eroticism – not only in the literal drawings of bodies but in the shapes that surrounded them too. Everything from the drape of a curtain to the curved lines of text typography, would all have its sweeps and arches dramatically exaggerated. Of course it was part of the allure, to communicate something sensual and with feeling – as opposed to be being flat and functional. 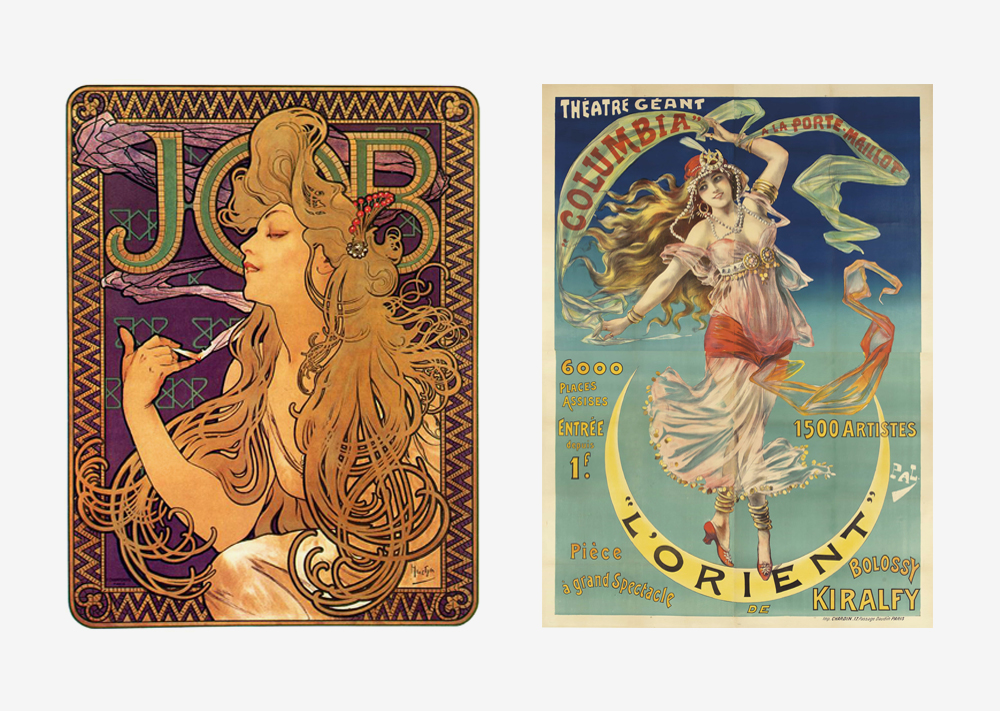 You only need to look as far as the perfume ads that don our glossy magazines and dominate our television ad breaks to question how far this branding has – or hasn’t – come in relation to selling by sexualising. It’s an age-old trope, and one we still feel a way off losing completely. However, there’s another woman whose face plasters paper cups and billboards globally without the erotically exposed shoulder or hitched up hemline. The quintessential Art Nouveau pinup. 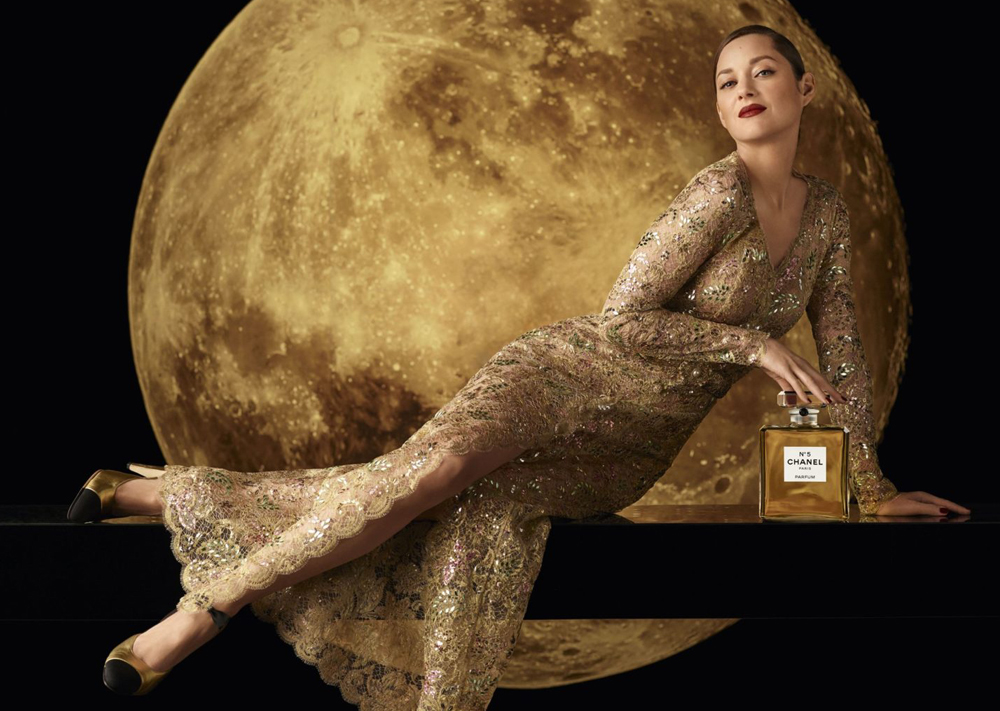 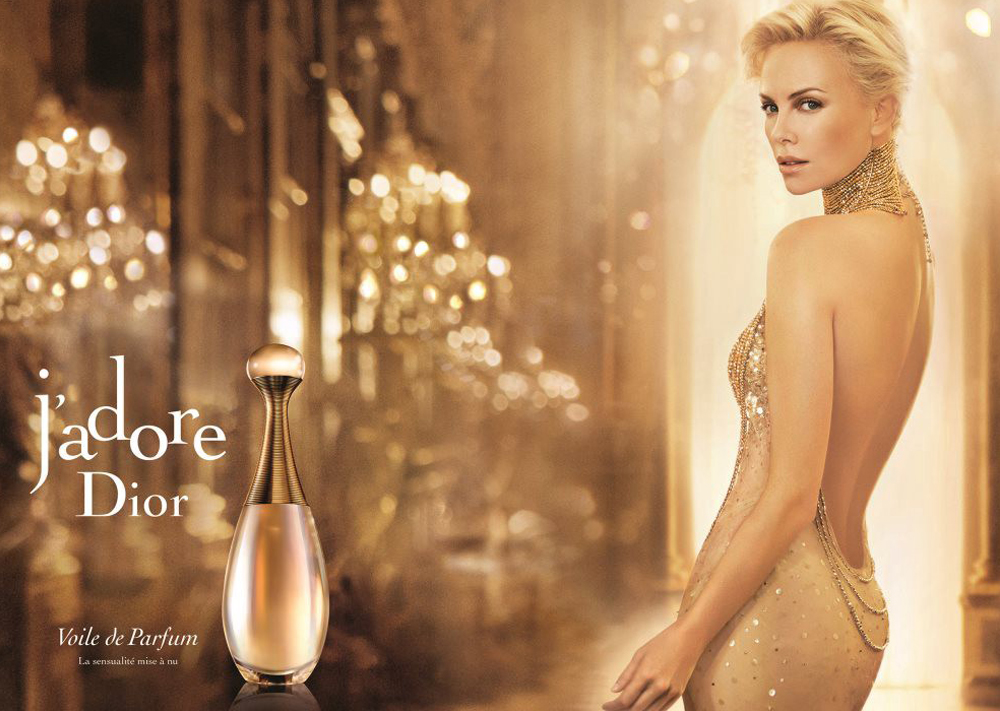 The powerhouse of coffee – Starbucks have closely aligned their brand logo to Art Nouveau since their inception in 1971. In fact, their original design wasn’t as tasteful as its millennial descendant. The company’s founders adopted the tale of Moby Dick for their brand narrative, and their first logo iteration was home to a topless twin-tailed mermaid. The idea was that just as these mythical creatures lured ships to crash on their coastlines, so too would Starbucks lure people to buy their coffee. As the company evolved, thankfully so too did their branding. Soon their figurehead, drawn in typical Art Nouveau linear style would have her modesty covered with long flowing hair, depicted in just three sweeping lines.

The circular shapes, block colouring and simple design have made the Starbucks emblem representative not just of their brand but of coffee generally. Nowadays, people ‘pick up a Starbucks’ – not just a cappuccino or flat white. It’s clever, concise branding that uses the very best elements of the Art Nouveau style of the 1900s to effectively communicate a brand at first glance.

Another key aspect design aspect that typifies the Art Nouveau style is its curved and free flowing lines. Spotted mostly in the bent mental of era’s architecture – the idea was centred around making the ordinary, beautiful. Think balconies, bannisters and the framing of entrances – everything from metro stations to museums. These decorative and intricate designs were at the helm of the Art Nouveau architectural influence but are also elements felt in creative branding both then and now.

Take Coca-Cola for example, their unmistakable logo is one of the world’s oldest and arguably one that has changed the least since being trademarked in 1893. Originally drawn in free-flowing handwriting, the script of the Coca-Cola logo is typical of its time in history. From the exaggerated curling Cs to the interlocking swirls that connect between the different letters – this logo has well and truly bottled Art Nouveau into the mainstream consciousness. Even the marketing tagline coined as recently as 2016 ‘Taste the Feeling’ reflects the sentiment we now know to be the emerging style of the 1900s – the desire to obtain a feeling, for feelings sake – to believe in the beautiful. 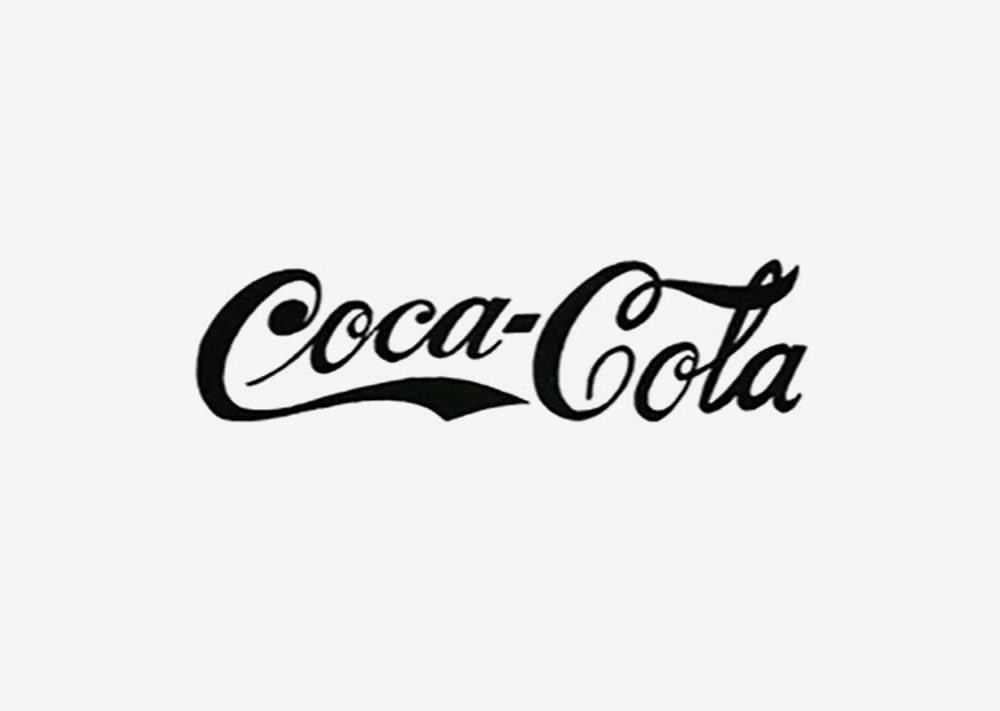 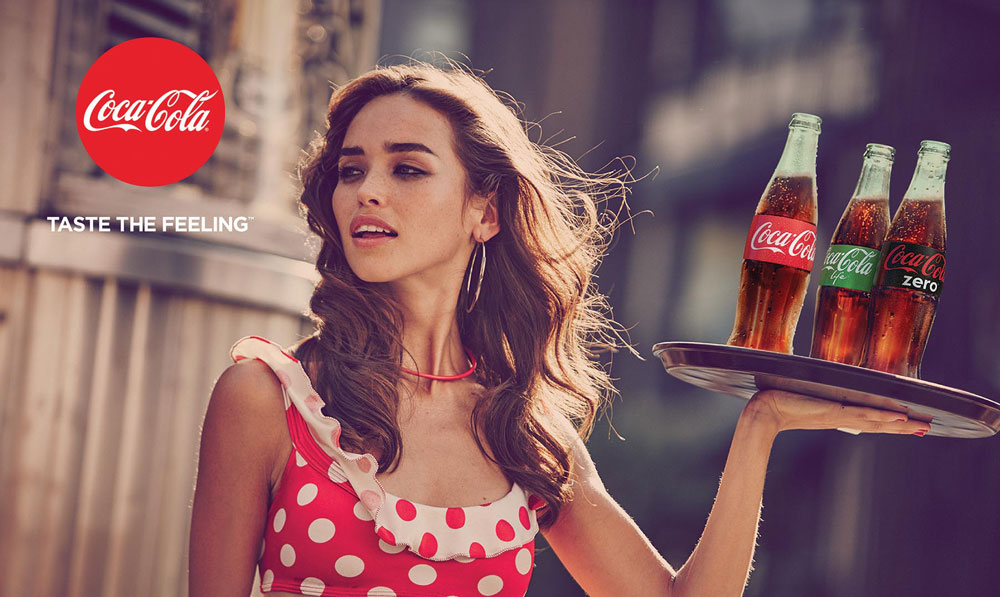 As a creative branding agency in Manchester, the team at Glorious have helped many brands to articulate their Art Nouveau style. For the Buy Art Fair – a client whose whole identity and ethos was founded in making the art world more accessible and inclusive, Art Nouveau felt like the exactly the right branding angle.

The Buy Art Fair (now Manchester Art Fair) approached our team at a time when The Independent described the industry climate as ‘the art world apocalypse’. Clearly, with all the noise going on in the macro environment – we knew that our outputs needed to be markedly different. We pinned our concept on that irritating red dot sticker, the one that is stuck onto pieces of art which have been claimed by another bidder.  Our idea was that by making this the logo of the art fair, the message would be one of accessibility and crucially, affordability.

Within that red circular stamp – we created a classic Art Nouveau font in which we would scribe ‘Buy Art Fair’. It communicated all the class, sophistication, and beauty that one expects when buying pieces of art – but by aligning the brand to the context of the era, the message was distinctively different. This, our logo said – was New Art. 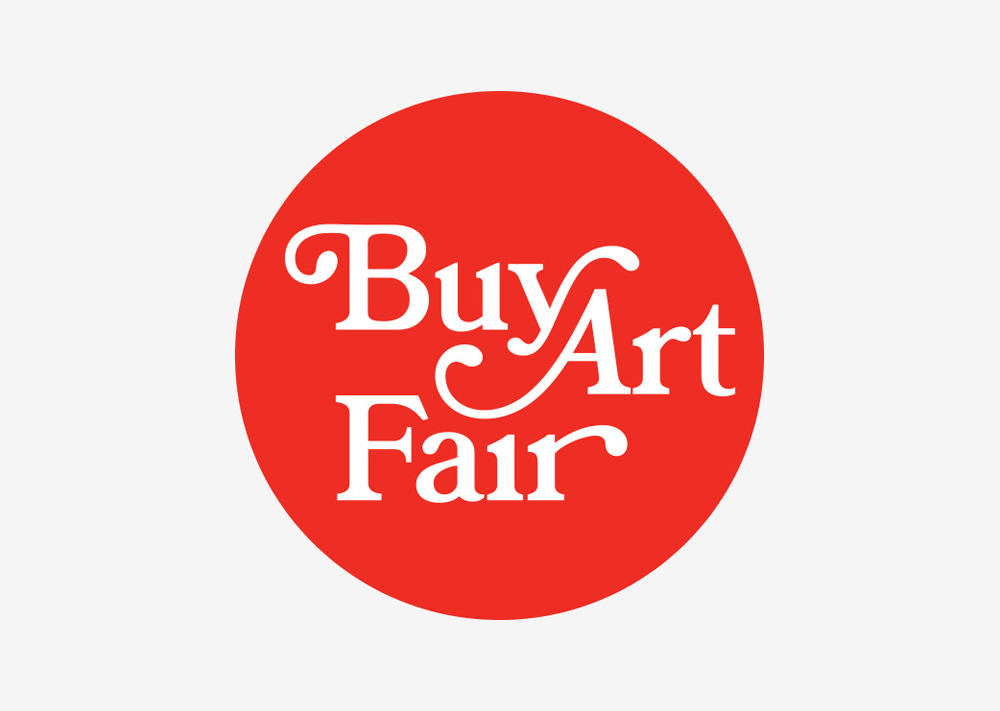 And for the 170-year-old French cigarette paper brand JOB, what style direction could we have taken other than classic Art Nouveau. Our team of creative experts spent hours poring over the design intricacies of the original posters from the 1900s, using the research to formulate their own creative outputs.

The result was four classic poster designs, which would don the walls of the London Underground and numerous poster sites across 12 major UK cities. The designs, thanks to Paul Harvey the Stuckist Artist, whose works are inspired by Alphonse Mucha creator of some of the earliest JOB posters, were clean linear illustrations, framed in the quintessential swirls and curves, featuring the floral shapes of leaves and lotus flowers. Testament to how even the most unmodernised Art Nouveau designs can feel just as potent and convincing in 21stcentury branding. 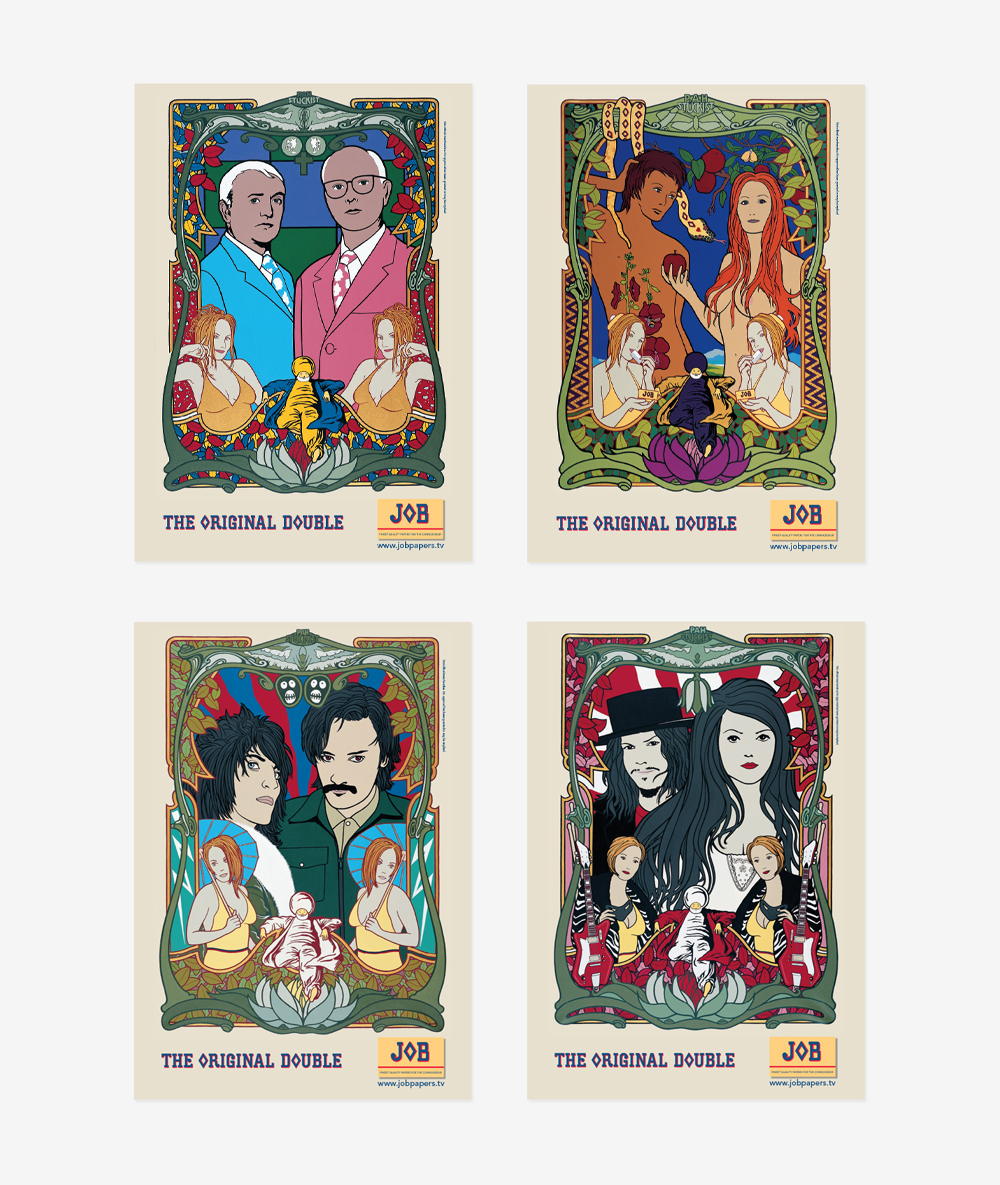 So, if all of that has left you romanticising about arching fonts and swirling, whirling illustrative patterns – then let us help set you on your way to etching your branding in the Art Nouveau style:

Remember, Art Nouveau is all about the sensual but that doesn’t immediately have to mean the sexual. Instead use curves and a softness to your typography and illustration to communicate feeling and emotion in your branding.

Consider the use of space, colour and decorative patterns within your creative outputs. The very best Art Nouveau branding doesn’t only work on the focal point of a logo for example – but instead paints a whole picture.

Art Nouveau design is often used for visual brand identities that want to be rooted in bringing life and beauty to all things, as well as conveying an air of elegance. For this reason, think about turning the ordinary into the extraordinary – showing your audience the hidden beauty in the world around us.

When considering colour, remember that if you want to stay true to the original art form – block primary colours are the way to go – framed in classic black lines.

For typography and fonts, the more curved, the better. And that extends further than just letter formation – think about the positioning of your text on the creative branding too. Whether they are arched over imagery or following the curve of your framed design – go all out.

Need help getting bringing your brand identity to life?
Find out how we can support.