The Glorious team is made up of football fans of Sunderland, Wycombe Wanderers, Aston Villa and Manchester United. So, every Monday invariably commences with an in-depth analysis of our respective fortunes over the weekend.

In the past, most working weeks got off to a great start for our Man United fans, but for a number of years, that’s been anything but the case. A succession of managers have failed to fill the shoes of the legendary Sir Alex Ferguson, until the appointment of interim manager and United legend, Ole Gunnar Solskjaer.

At the time of writing, the Norwegian has won all but one of his first ten games. Early days perhaps to start hailing a revolution but the change has signaled an instant turnaround in the team’s fortunes.

But what’s this got to do with branding you might, quite rightly, ask?

Well, our Man United supporting Design Director, Grant Mitchell, has been giving it some deep thought and has arrived at the conclusion that one of the major factors that led to the demise of United’s previous manager, the vastly experienced, serial winner, José Mourinho, was that he failed to grasp how important the club’s values and culture were.

Since the 1950s Manchester United have built their global reputation on a number of key principles: The promotion of youth; the commitment to exciting, attacking, entertaining football, and finally, to not only just win football matches but to do it in style. All of which are engrained into the DNA of the club.

You could call these Man United’s brand values. And it appears that Mr Mourinho and his predecessors either failed to understand their importance or in some cases didn’t care for them, which led to a fundamental disconnection between managers, the club and its supporters.

Solskjaer’s understanding of these values is unquestionable. Indeed, during his illustrious career, he played a significant role in building upon these principles. He has, with immediate effect, reconnected and reminded everyone of how important these values are and has lived and breathed them through every interaction with the staff, media and supporters. And there’s an honesty about him which reaffirms his authenticity. 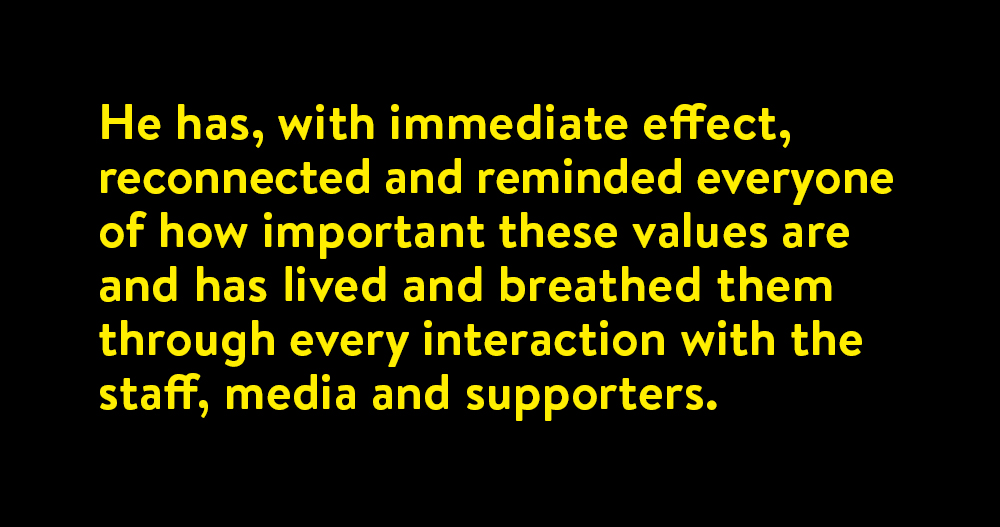 So, what can we learn from this when establishing or re-evaluating your brand values?

Firstly, it should be said that the importance of brand values is viewed very differently. Some companies see it as a token exercise. Something which a branding agency has told them to have. Consequently, they are quickly forgotten or at best given lip service in a company presentation.

Then there are companies that are built around their brand values. To them, these values aren’t just meaningless, generic words like transparency, honesty, integrity and dynamic. They actually form the basis of how the company behaves and acts. Walking the walk AND talking the talk.

Companies who place values at the very heart of their organisations have to be accountable to these values. That’s why it only works if the company truly lives and breathe these brand values on a daily basis. For example, if a company holds up integrity as a core value, they can’t then be seen to have questionable working practices e.g. zero hours contracts. Or perhaps a company might extol transparency as a fundamental brand value. So, you’d expect that company to be open and honest about what the staff earn – including the CEO. If not, how can they truly claim to value the importance of transparency?

When we conduct brand workshops with clients, it’s important to stress the importance of a brand value system to them. And in most cases, we simply uncover the values that are inherent within how they go about their business but have yet to be articulated and communicated.

So, whether you have a rich history like Manchester United and need to reconnect with your values or you’re an ambitious start-up business looking to make your mark on the world, don’t underestimate their importance. It may just provide the competitive edge your company requires when attracting, recruiting and retaining like-minded staff who share your values.

Looking to develop a successful brand? Find out more about how we can help.