The Magician is spellbinding amongst the 12 brand personality archetypes, hypnotic almost and undoubtedly persuasive. It’s not just white rabbits pulled from black top hats, but metamorphosis, total transformation, dreams made reality. Always though, it’s the promise of the impossible made possible: ta-daah. More than just attracting attention, more than even entertainment; it’s about defiance of perceived “reality”, pushing through our, mostly self-imposed, limits.

It’s a different kind of magic than perhaps the one we were brought up on, of wizards, witches and wands, but it’s a powerful one all the same, inciting a belief just as strong. Usually we need name just one champion of a brand personality archetype in human form, but for the Magician namesake, there’s several. Mayor Tom, Ziggy Stardust, Halloween Jack, Jareth, Nathan Adler, David Bowie. Heralded as one of the most iconic stars of our time, Bowie’s influence stretched fashion, music, science, art and film. His magic transcended gender and sexuality in an era when his contemporises would be being probed, questioned and examined under scrutiny, pushed into the concrete definitions set by public opinion. Under his countless mysterious pseudonyms, Bowie captivated millions, who saw through his ever-evolving reinvention of identity, their ability to transform their own. 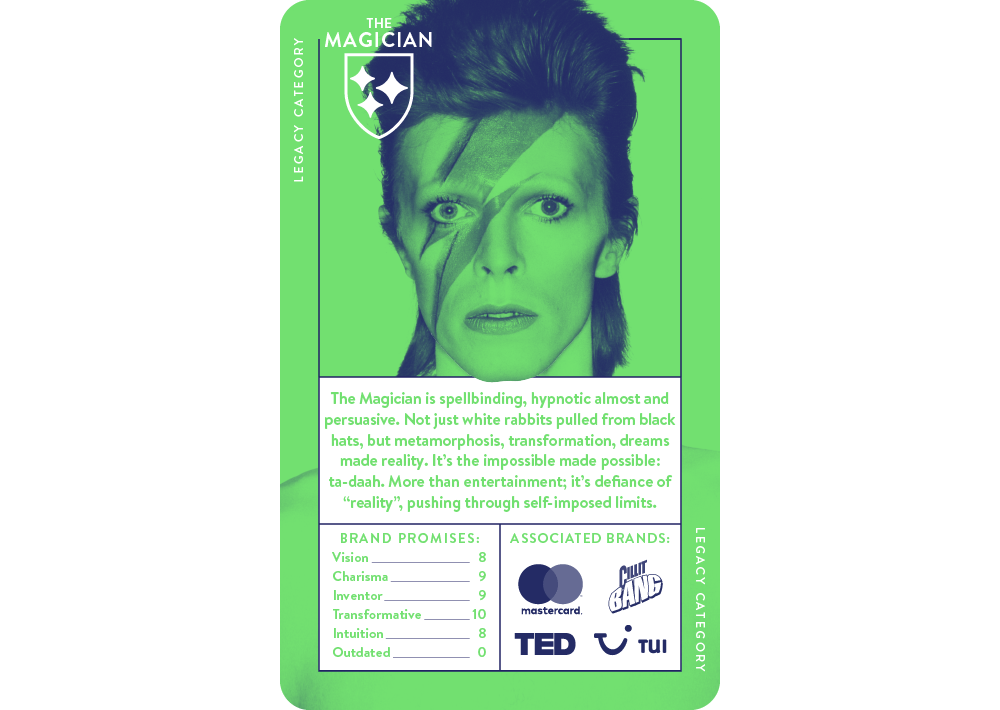 So let’s take you now to the brands that emulate this type of transfiguration, whether in their product, promise or promotion. TED is a non-profit organisation who, in their words, ‘believes passionately in the power of ideas to change, attitudes, lives, and, ultimately, the world’. Now that’s a pretty hyperbole way of describing motivational talks and discussions, with an index that spans anything from how to spot a liar to What makes a good life? Lessons from the longest study on happiness, but perhaps it’s exactly the premise that makes for a good Magician brand. It’s the promise of knowledge, a blueprint on how to live better, to begin at point A and end not at point B – but instead somewhere completely alternative, undergoing a transformative experience that lands you somewhere around G.

Ok, we’ll loose the alphabet analogy but you see the point. The core marketing messaging that floods across their well-branded website and promotional campaigns (by none other than Ogilvy) is as kinetic and instructive as you might expect: ‘Broaden your horizons, Find your potential, Ideas inspire Ideas, Ideas change this world – spread them.’ Like Ziggy, TED present themselves as visionary, a medium that facilitates fresh discovery and unlocked opportunity, albeit a more earthly one than finding life on Mars. 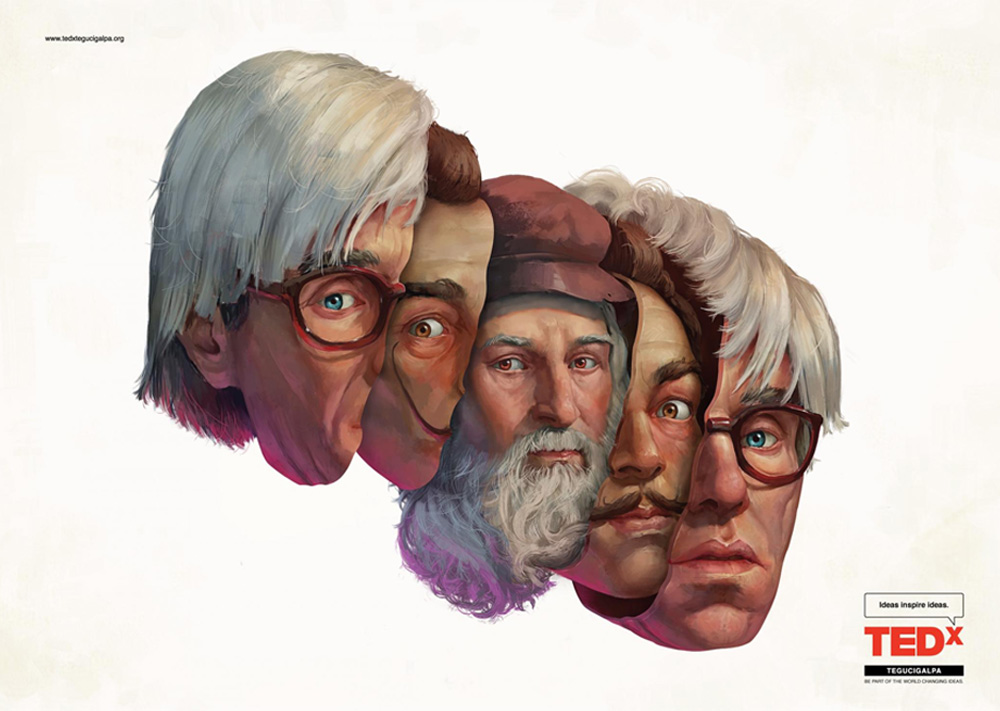 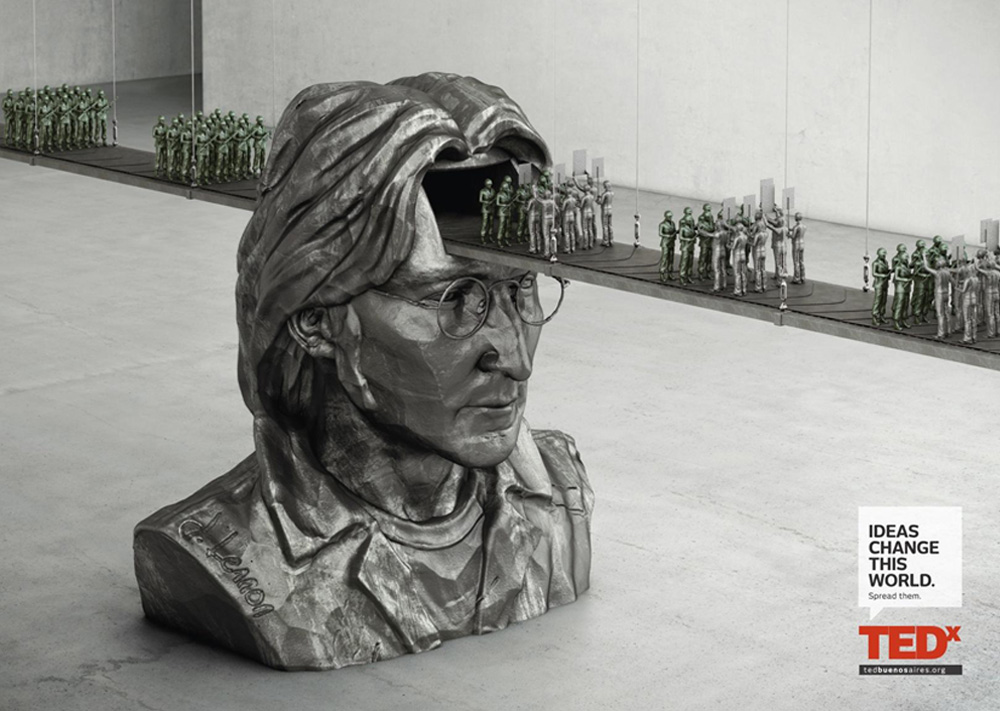 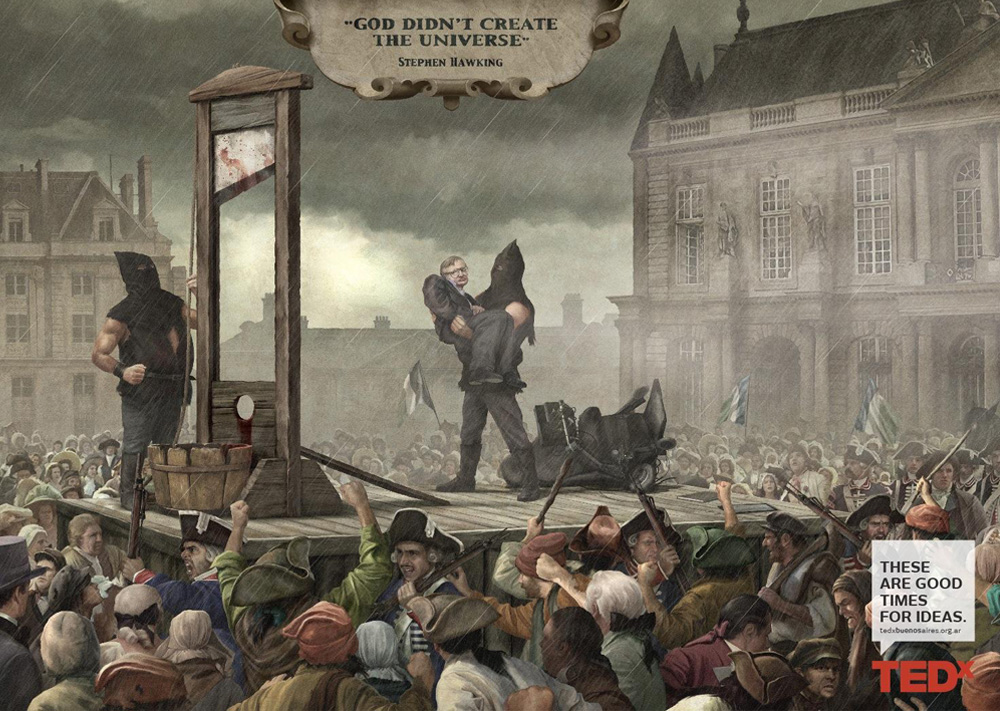 In somewhat shortsighted irony, credit lenders often align themselves to the Magician brand personality. Disassociated with debt and spiralling spending habits, and focused instead on the transformative power of borrowed money, brands like MasterCard cleverly cast their brand image. First launched in 1997, their ‘Priceless’ campaign is one that’s carried the brand through decades. From the typically crass and ill-advised financial guidance of the early noughties campaign which sees a sequence of price tags appear alongside clothing items donned in the same order by an attractive female model, (dress $200, shoes $150, bag $90), the ad crescendos once she reaches a suitably sultry bar and an equally attractive man becomes so transfixed on her appearance he knocks over a tray of cocktails, cue message… ‘look on ex-boyfriend’s face… Priceless’.

Thankfully they’ve moved with the times, and their latest branding campaign brings with it all the magic you’d hope for. It sees a young boy admitted backstage at a circus filled with acrobats and performers, inspired by his visit the boy is transfixed, he sketches, he practices, he peruses his dream. The ending credits name him as ‘Future Cirque du Soleil performer’ and we’re told ‘find your own way, to start something priceless’.

With clever Magician messaging and ingenuous affiliate marketing in their partnership with some of the world’s most exclusive entertainment events, MasterCard too pitch themselves as the portal to discovering magic. The low credit score comes as a courtesy.

In what’s perhaps a more natural pairing, travel brands often sidle into the semantics of Magician branding. Their magic hat is packed full of white sand, plumped pillows and brightly coloured lilos, timed usually to be served during the height of winter or equally effective miserably wet summer (or worst still, peak pandemic), when Brits are palpably desperate for a break. Tui is one such game player, in joyous brand colours of sea blue and a crimson red packed with all of the sun’s heat, the brand tells us ‘Find your smile’ since its 2018 re-brand campaign. A tagline that would be probably feel rather irking and intrusive were it not one selling holidays.

Now for a word of caution – not all of those categorised in this field of sorcery can live up to such lofty, grandiose promises of bigger smiles, brighter futures and better worlds. Instead, some are focused on a more basic magical skillset. Barry Scott furiously announcing ‘BANG! And the dirt is gone!’ to the backdrop of gleaming kitchen tiles is perhaps a campaign we’d much rather forget, instead it’s one that haunts trips down cleaning aisles everywhere. The messaging is clear and simple, problem-solving and metamorphic, even if we are talking about grease and limescale. Across their product line, the branding is as loud as their ambassador and the packaging uses iconography that pretty much haloes the brand name – the anointed saint of domesticity.

As a branding agency, the team at Glorious have waved their wands for many a client looking to align themselves with the Magician brand. EnergiMine is an established business offering energy management to companies all over the globe, whose main objective is to disrupt global energy markets, and as a result, deliver transformative environmental outcomes. They approached us with a brief to ensure this vision for a new energy age was clearly communicated through an extensive brand refresh. Along with a strong visual identity and a new brand symbol, the rebrand included the development of a brand purpose: ‘to make a positive impact on the planet’ and a brand promise of: ‘a world of energy’. The brand personality was defined as: ‘Innovative, daring, quick-thinking, adaptable, competitive, dynamic and pioneering’.

A set of brand values was also created: ‘Dare to disrupt. Constantly innovate. Be quick to adapt. Always, high performance. Be open and transparent. Achieve global change.’ Giving the team at EnergiMine an invaluable lens through which to determine future marketing campaigns and creative assets, was the cornerstone to them launching as a visionary brand capable of transforming a market as enormous as energy.

Insiris, a specialist consultancy engaged in solving works management and manufacturing process problems, were a client also looking to unlock their potential. The brief was to rebrand the business in order to differentiate Insiris from off-the-shelf software solutions. After extensive brand workshops to unpick what sets Insiris apart from the competition, the Glorious team determined the creative expression ‘Human ingenuity, leading technology’ would appeal to CEOs, COOs and Operational Directors who believe that bespoke technology can help them achieve innovative and productive outcomes for their business, and help to reimagine how they work. 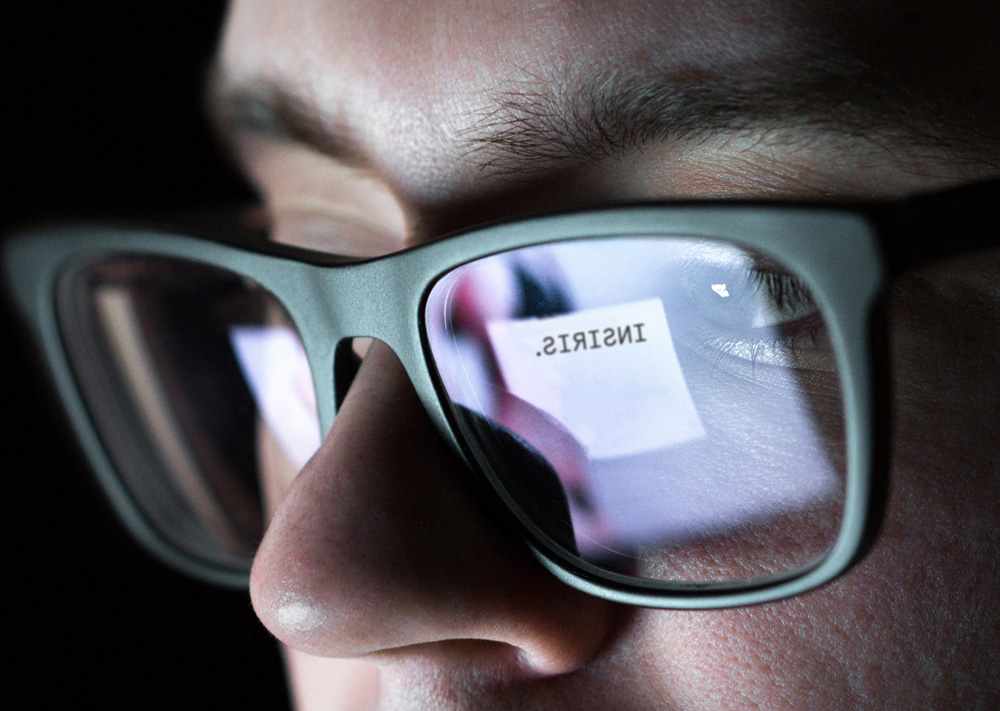 We used this understated identity to inform the entire branding. The messaging was simple, providing clarity around the offering and the strong use of black with minimum colour, visually differentiated the consultancy from other providers in the market.

So there you have it, magical branding can be found in even the most unassuming of products or propositions. You just have to deliver your message with conviction to convince even the most unbelieving of consumers.

And here’s a couple of hints and tips on how to do it:

• Highlight the capability of your brand as a facilitator of change and transformation, lead with the promise of better.

• Create marketing messaging that incites discovery, knowledge and revelation – and then pivot it so it all centres on your brand, make it exclusive to what your product or service can offer.

• Don’t be afraid to be bold with your promises, we’ve seen that not all successful Magician brands focus on life’s big questions, some are just as effective in cleaning clothes better!

• Use a lexis that is kinetic; you want to inspire your customers to take action, make a change by choosing your brand over others.

• Visual branding should illuminate the sort of transformation customers can expect, Magician consumers don’t want to have to work hard to imagine the benefits of a brand, they want them spelled out for them… right before their eyes.