Ever the performer, the Jester jigs, jokes and juggles for attention amongst the 12 brand personality types. But don’t be fooled by the slapstick, no – the Jester is sharp of mind, witty, and well versed in sarcastic satire. Never one to take life too seriously, the Jester is the first to point fun at the serious; growing up doesn’t automatically mean stripping away the joyous bursts of excitement and humour that punctuate childhood, instead says the Jester, let’s build a brand on them.

Rowan Atkinson is the token Jester namesake. His onscreen alter ego Mr Bean finds himself in the most unfortunate of circumstances, much to the viewers delight. Bean, fluent in his unique dialect, a vocabulary that extends not much more than umms and arrs, along with exaggerated facial expressions and overacted mannerisms, became TV gold. Scenes are filled with dramatic irony; as the unlikely protagonist mocks the unwritten rules of British society – thou shall be quiet in a library, cue to Bean, performing a massively overacted tip-toe in a bid to be as quiet as a mouse. You see, it’s funny but the best Jesters can carry a satirical narrative in amongst the good fun.  So, without further ado, let’s drop the stage curtain, and see what a Jester brand is all about. 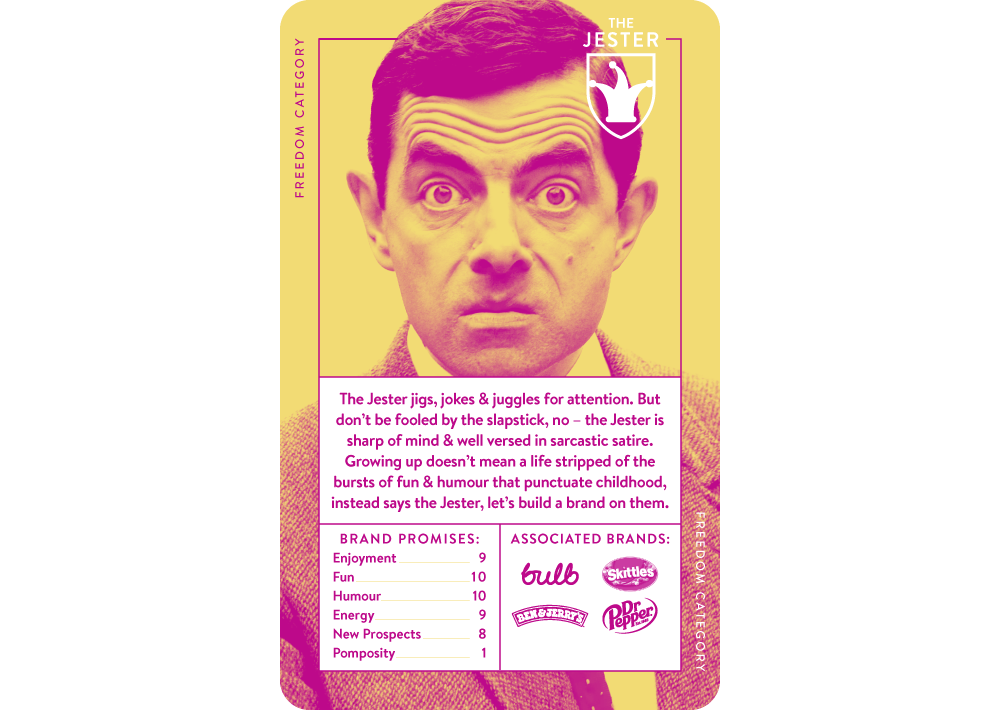 There’s perhaps nothing more sterile in life than the admin of paying bills, and perhaps it’s the energy bill that tops the most mundane of ‘to do’ lists. As a new player in the monopoly of energy giants, Bulb knew they needed to somehow shake things up in a market where consumers are really rather numb to marketing.

Now either someone blurted out ‘Unicorns!’ whilst storyboarding the next ad campaign, or it was a stroke of calculated Jester genius. In a hand sketched animation, a couple of unicorns enjoy a matrimonial cup of tea whilst scanning the morning papers – husband unicorn reads the headline aloud “Bulb is the biggest green energy company”, to which wife unicorn replies “hmm humans may save the planet after all”. Husband then starts his appeal “Does this mean we can come out of hiding!” – wife who is reluctant [“not this again Terry!”] agrees a compromise: Bulb customers rewarded for their choice in energy providers, will be the select few to see a unicorn.

With the flick of the switch, Bulb put life back into the ad campaigns of energy companies, and all without a mention of fixed rates, tariffs, and smart metres. Instead it’s heart-warming and humorous, a mini screenplay on how to see the brighter side, (quite literally, set against a ridiculously bright pink background). 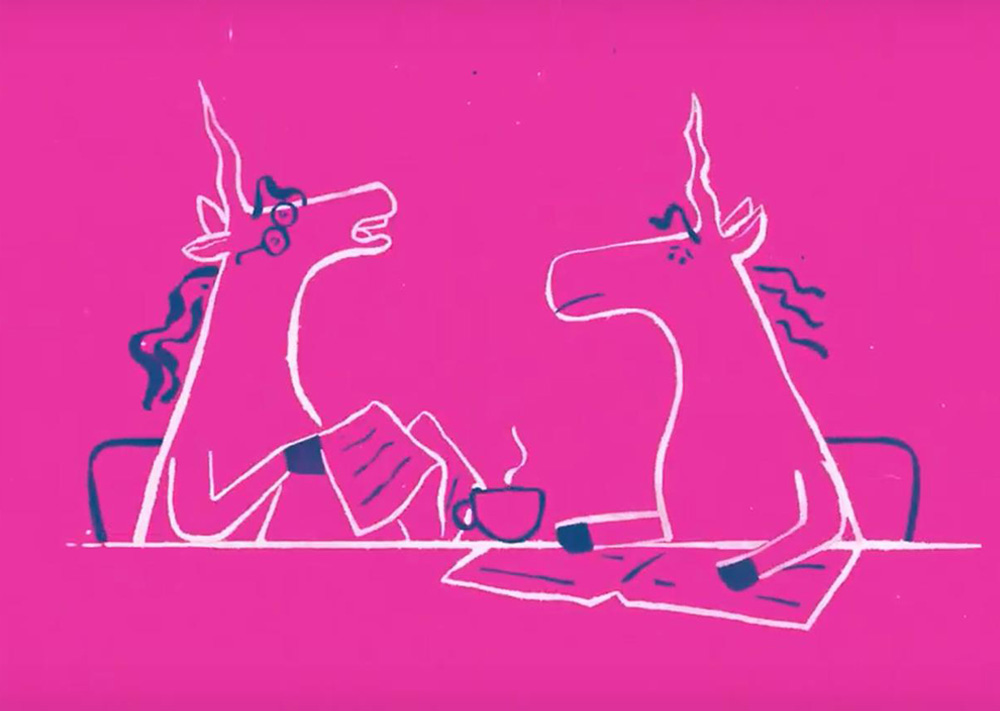 Got right, the Jester brand can humanise industries that are usually met with consumer distrust and even resentment. Market comparison sites are one such target for angst and frustration. Insurance, credit cards, mortgages – these sites are indexes for the real grit of proper adult-ing, so it’s only natural that most are branded with all the seriousness of grown up responsibility.  That’s until its improper spelling of the word ‘market’ came to the attention of a Russian speaking meerkat who heads up his own comparison site. Users hunting for the best deal on their home insurance rather than a mob of meerkats had flooded their engine, warranting an ad campaign that introduced Aleksandr Orlov, who addressed the nation with what’s now become his trademark “It’s compare the market, not meerkat”. And just like that, the campaign had (small, fury) legs.

By creating a persona entirely detached from their product and service, Compare the Market have breathed affection back into an industry that previously felt unfriendly, an unfortunate necessity in the roadmap of life. So successful is their Jester branding that you can even buy cuddly toys of the country’s most famous family of meerkats – who’d have thought a comparison site advert would be source of a list to Father Christmas…

Now onto an industry much easier to swallow: confectionary brands. Ben and Jerry’s list of flavours is perhaps a good indication to their brand identity. Phish food is an unusual title for a tub of ice cream – it doesn’t make sense, the only connection to the contents being the small fish shaped chocolate pieces mixed into the dairy product. But isn’t that the point of the Jester, to create small pockets of fun for funs sake, for the joy of silliness and smiles in an all too serious world? It’s a theme they carry onto their website and throughout their content marketing: ’15 of the craziest flavours ever suggested’ ‘QUIZ: which Ben and Jerry’s flavour should you date?’ It’s shareable content that lends itself to consumer engagement that’s far wider than just being a tub of ice cream for a Friday night in. 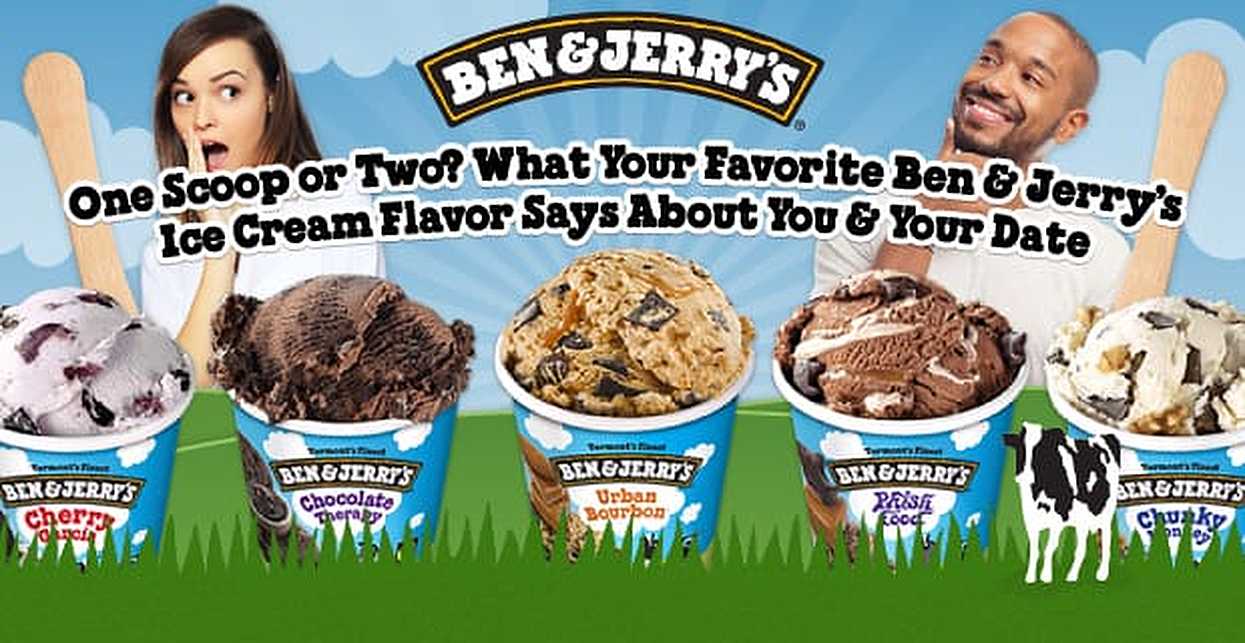 ‘Taste the Rainbow’: it’s an instructive, persuasive tagline that’s likely followed many of us on a trip to the corner shop.  The connection between product and promotion is subtle but it’s visual, a positive and promising image that evokes sun after rain, a pot of gold, somewhere over the rainbow. There’s the happy go lucky marketing, now for the comedy. Imagine a world where everything you touch turns to skittles? This brilliant campaign saw answering the phone, operating a till, waiting at a bus stop all hindered, when at the slightest touch objects disintegrated into millions of brightly coloured sweets.  It’s funny and it’s catchy, (thankfully not literally) creating a lasting and inimitable impression on the viewer. 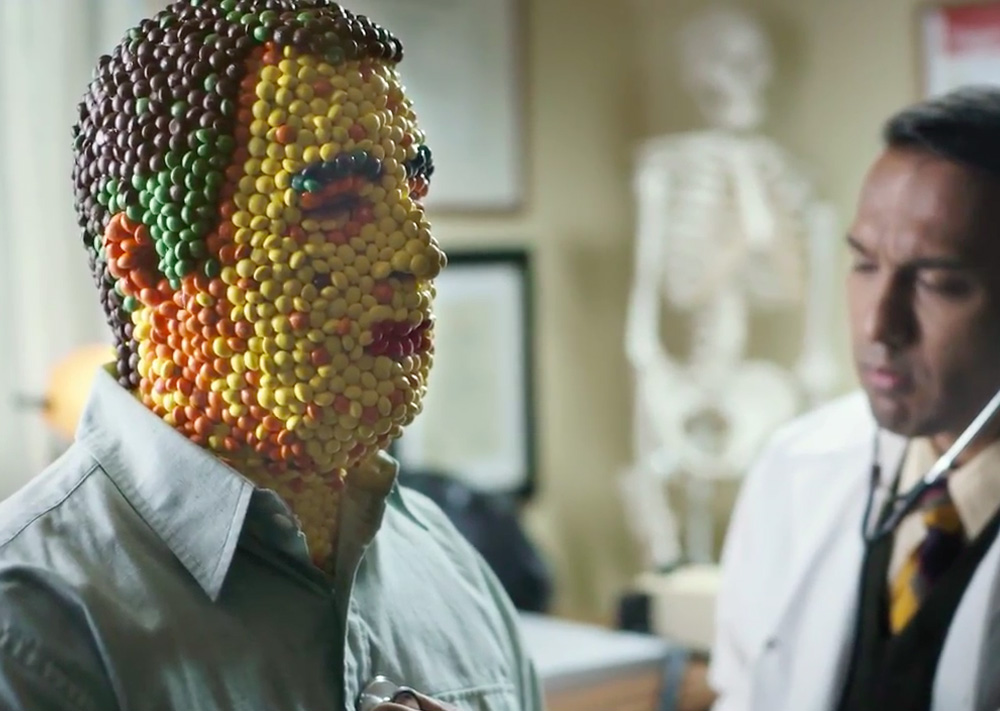 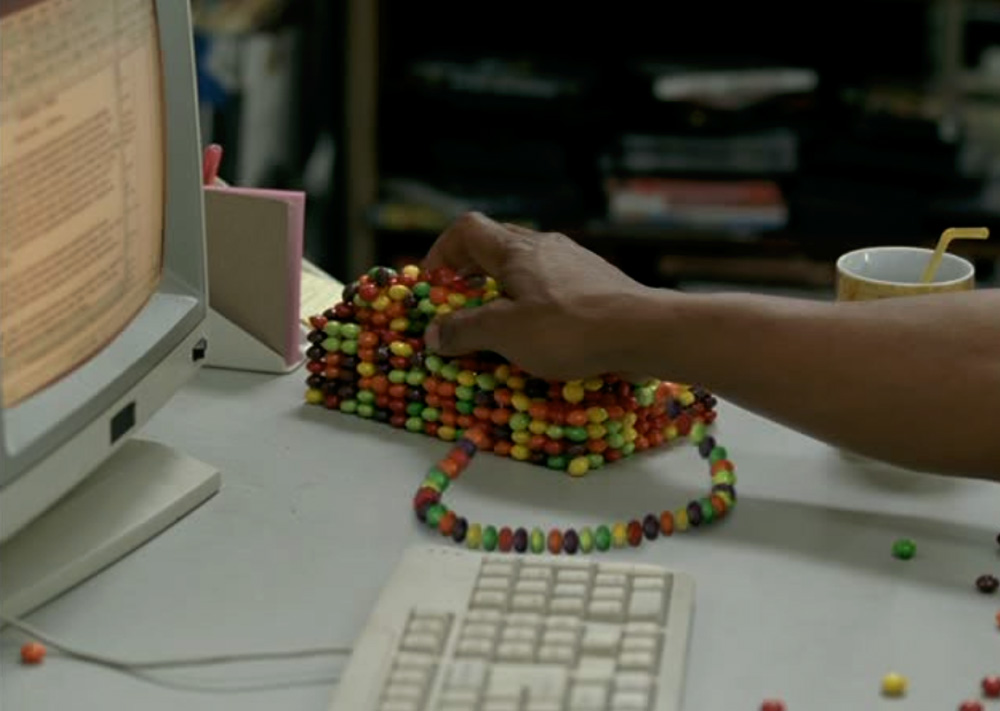 And finally, we couldn’t leave the sweet tooth industry without mentioning a can of pop. These guys are the masters of Jester brands, wrangling their way out of high sugar content and rotting teeth by bantering. Dr Pepper’s tagline ‘what’s the worst that can happen’ was answerable in a great number of ways and many of the outcomes unfavourable, but the pitch was clear; we’re simply a fun brand offering a thirst quenching drink – no harm done, right?

Here at Glorious we’ve helped a number of brands bring out their funny side. Rentinc approached us as an existing, but somewhat indistinct, property brand operating in the already crowded Leeds letting market. We were commissioned to reposition and strengthen the brand identity, create a point of differentiation and give renters a valid reason to choose Rentinc over the competition. Once the student market was identified as being their target audience, we were able to start sculpting the sort of branding that attracts the Jester consumer. The new positioning enabled us to adopt an ‘edgy’ tone of voice, a distinctive illustrative style and create a more youthful brand personality, all attributes that set the client apart. With a tongue-in-cheek strapline: ‘Student Housing. Sorted’, and a number of different student personas illustrated in the new playful style, the team created memorable and visual elements that worked towards creating a lasting image. 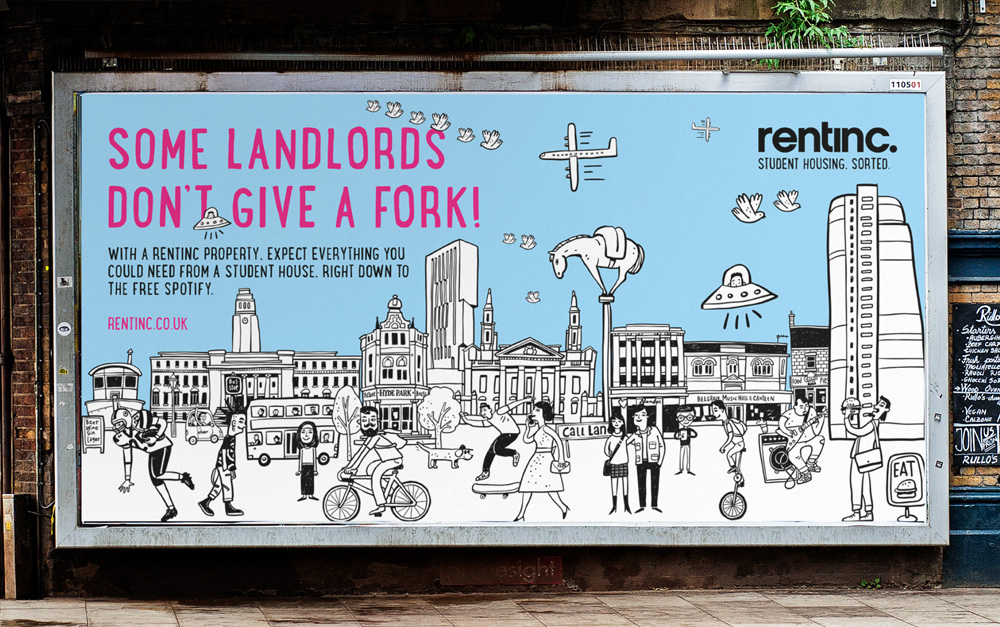 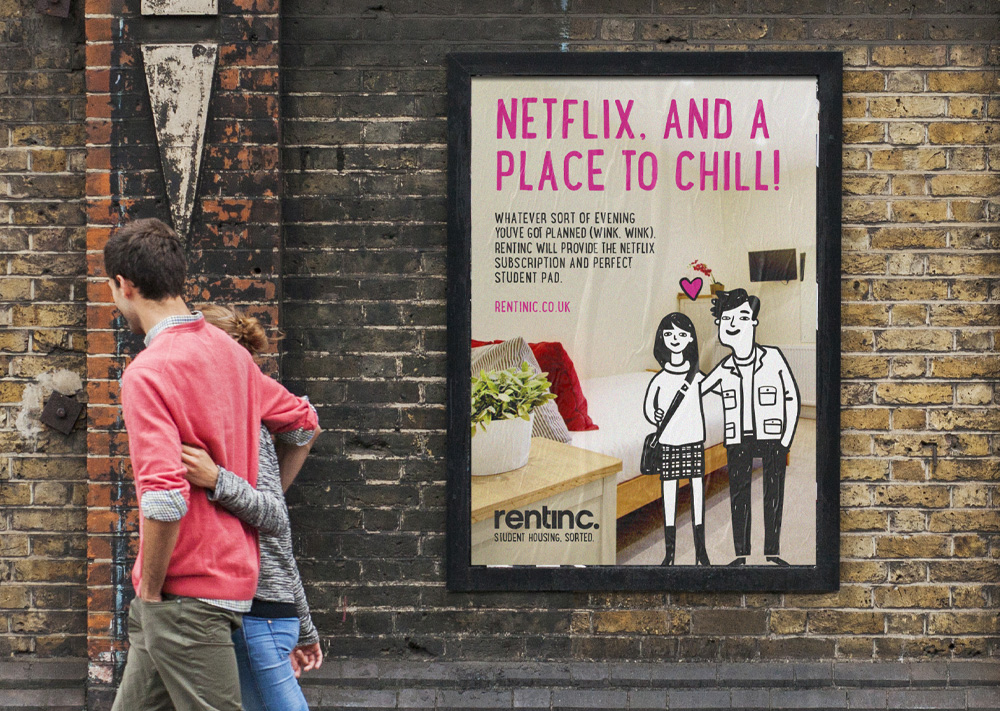 Mount Fetti is another brand who looked to Glorious for a fresh new look. With a hero product already established as Mango Sangria, the team at Mount Feti needed to build on that, create a brand vivacious enough to carry the feel-good summer vibes even through the darkest months of the British winter, but also to be versatile enough to allow scope for future product lines. By imagining Mount Fetti as the backdrop to the brand’s story, an exotic remote island filled with trees laden heavy with fruit, the Glorious designers created branding collateral with a vibrant repeating pattern of subequatorial leaves and crimson-feathered parrots. It’s enough to make even the most hardy Northerners begin picturing themselves slouched in a deck chair sipping on a brightly coloured cocktail don with paper umbrella – you know the one.

So if we’ve left you feeling a little lighter, like making your brand the source for smiles rather than scorns, then let’s make sure you keep it witty and clever, and avoid the clichés (avec ‘live, laugh, love’). 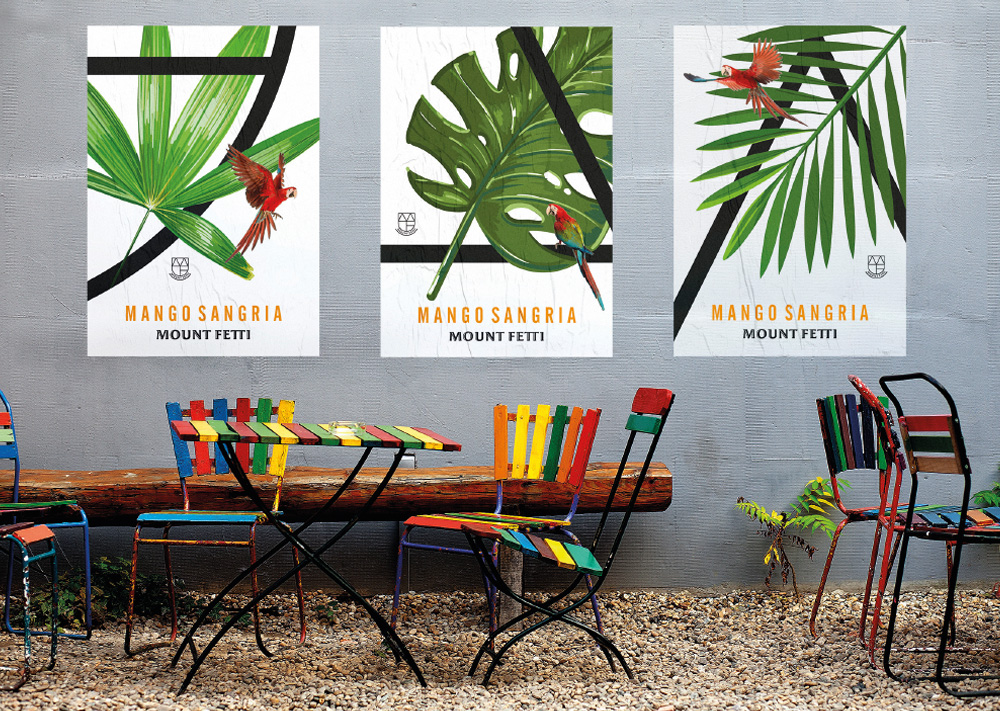 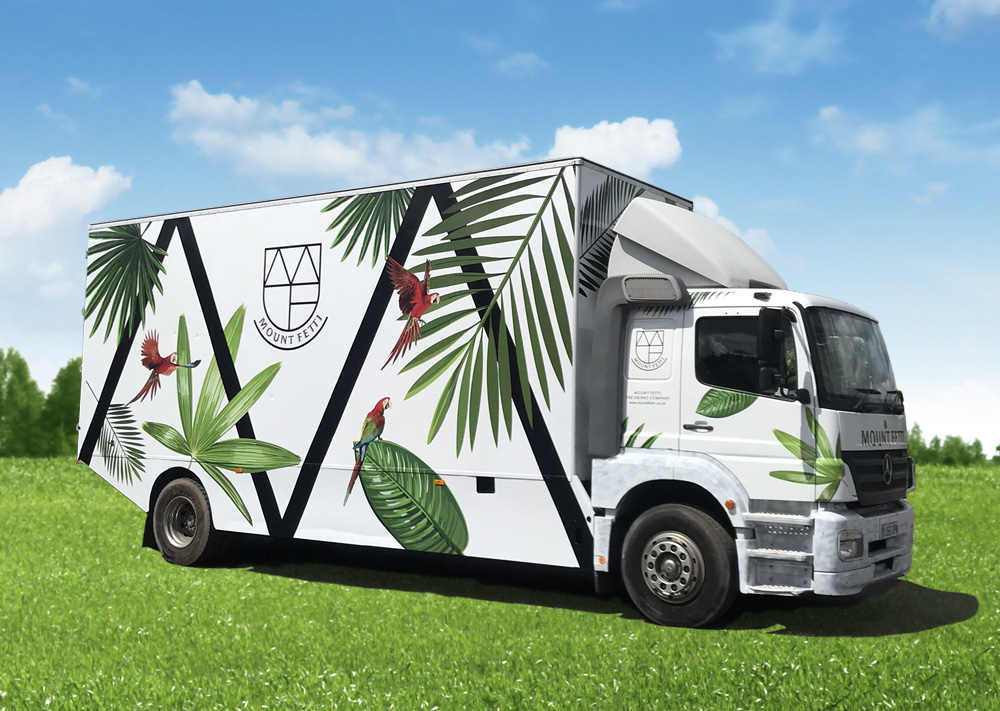 Here’s our starter pack for ensuring you front the jokes, rather than butt them:

• The best Jester marketing campaigns often look like accidents, they don’t make enough sense to have been run through boardrooms and committees, and that’s exactly their genius.

• Tone of voice, creative style and brand messaging should be light-hearted, joyful, full of fun and energy – it should really connect the consumer to the nostalgia of carefree times, not conscious to the sales pitch.

• Think outside the box, however functional your industry might feel, it’s only as limited as your imagination. For the Jester consumer, the more random your campaign, the more they lap it up! Unicorns to market energy; use that as your benchmark.

• Don’t be afraid to take the Michael! Done with tact, pointing fun is an opportunity for common ground rather than cause for division.

• Creating a genuine and authentic positive reaction in consumers should be at the core of any marketing campaigns, put simply – making people smile.