The Creator is perhaps at once, the easiest and the most difficult to identify amongst the twelve brand personality types. Easiest, well because the feather headdress, robotic armoury and jet-flame boots won’t belong to any of the others, and most difficult because the Creator rarely assumes the same get-up twice. Ever-evolving and continuously fluid, this brand personality absorbs the nuances of consumer demands and morphs into a creative solution, admittedly sometimes so abstract, it isn’t always immediately recognised as one. The Creator should inspire awe, wonder, possibility and just a little bit of ‘what the…?’.

Take Björk, the Icelandic national treasure who inhabits that rare crossover space between pop star, artist and extra-terrestrial. Interested in the off-beat and experimental, Björk’s career spans more than 30 years, punctuated with twice as many pseudonyms. But aside from pushing boundaries with her physical appearance(s), Björk pioneered the way in which technology could be married with music. Her most cutting-edge moments see Björk experiment with live streaming in the days of dial-up, become the first musician to adopt the Reactable – an electronic musical instrument in which glowing “tangibles” are moved around a lit-up table to create different textures and rhythms, and launch an album available to buy with cryptocurrencies including Bitcoin. An unceasing desire to create, invent, make new: the Creator is endlessly metamorphic. 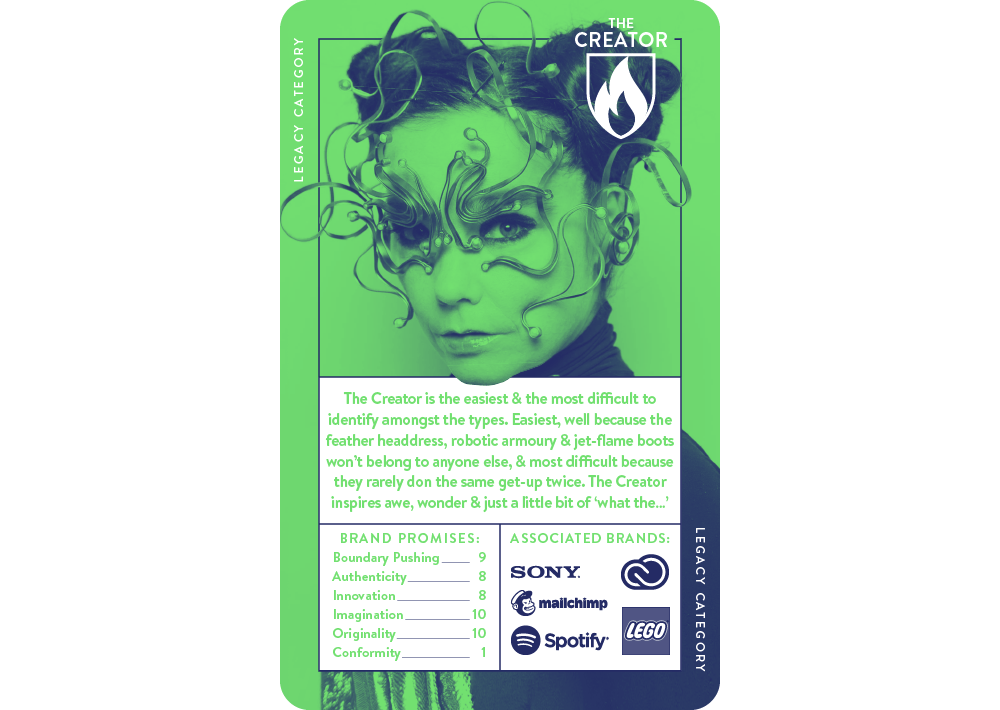 Yet for all the performance, there isn’t much bravado. The best Creator brands show rather than tell – there isn’t a compulsion to over-explain the how, where, what and why, instead a confident acceptance, that we’ll either get it or we won’t.

Adobe Creative Cloud, the Apple branded suite of digital editing tools, hinges their proposition on being great facilitators of change and creativity. In fact, their recent campaign saw a New York subway transformed into a dystopian universe, using tools like a Magnetic Lasso, Magic Wand and Clone Stamp. The whole landscape erupts with characters and colour, imagination superimposed onto reality: ‘creativity for all’ the tagline reads. Adobe translate this narrative across each of their marketing channels, conveying everywhere the optimal potential of their products. The Tone of Voice is punchy, and it probes and prods the consumer towards purchase, ‘What will you make of 2021?’ asks the promotional messaging surrounding a January offer. The language all points towards illuminating what is possible, what can be crafted and constructed, from blank canvas to creation. Colour palette, iconography, illustration, all add to the intrigue and excitement, demonstrating that with these tools in your tool box, you really can create anything. And that’s just it – Adobe have successfully branded a toolbox into a toybox. Playful with purpose, purposely playful; life is the art, art is the life et al. We warned you’d either get it or you wouldn’t.

Another brand looking to unleash their creative genius, did so in the form of thousands of brightly coloured bouncy balls. Quite literally, SONY unleashed so many of the said bouncing balls down the streets of San Francisco, that ten years later, residents are likely still finding relics of this iconic campaign. Of course, the tangible message behind the idea was communicating the crisp picture clarity of their latest Bravia LCD Television. But it was the intangible message that meant so much more, the rule-breaking creativity allowed the brand to embody its ethos. So that when they use semantics such as ‘redefining’, ‘exceed expectations’ and ‘created for creation’, within their marketing messaging, these superlatives aren’t just empty, but instead filled with evidence that coverts consumer investment.

And speaking of rule-breaking, how about a brand where there aren’t any rules at all? No instruction other than ‘Rebuild the World’ – a tagline open to interpretation with every purchase, reinvented by every individual. The plastic building bricks of LEGO fuel the imagination, and for many consumers it’s a love affair that begins from not knowing what their final design will be until it’s built, endless possibility unfolding with every piece. And, of course it’s not just in their product but their proposition too, that LEGO fixate on being the facilitator of great creativity. The brand name itself nods to an abbreviated ‘Let’s go!’ – an energetic and engaging call to arms, all in the name of creating. Even the logo is designed with a typography that is almost bouncy, lively, kinetic, as though the letters themselves are eager to get started. And this translates onto their digital marketing channels too. There aren’t many e-commerce websites whose welcome screen prompts either purchase or play, offering scrollers the option to explore reams and reams of content, from interactive videos to games, from building ideas to character introductions – the interface of this functionality designed akin to a mood board, the starting point for all great ideas. By promoting possibility, LEGO are able to morph and shape the brand meaning based on the eye of the beholder. What LEGO means to me, might not be what it means to you, or them, or she, or him, and so on and so forth. The genius is it’s universal, shareable, and yet completely tailored, all at the same time. 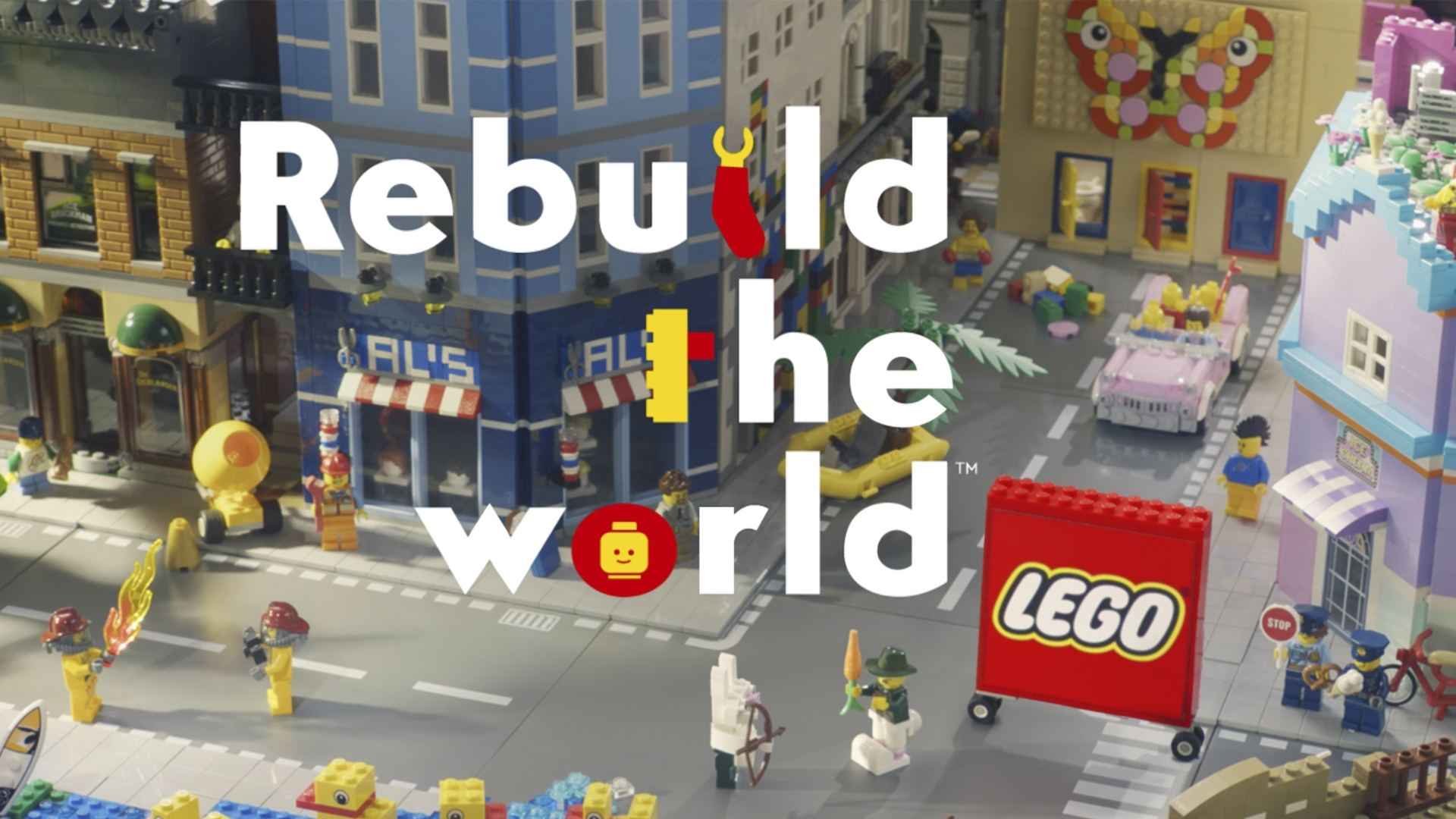 It’s this same principle that makes for some of the world’s best streaming services. Take Spotify – they already have a leg up as a Creator brand since their product is arguably creativity itself: music. Millions of artistes fill the Spotify platform with musical contributions, creating what could be a minefield for the unassuming listener trying to rediscover the soundtrack to their early years. Thankfully, the genius Creators at Spotify have developed algorithm after algorithm to personalise the platform for every user. From a ‘Your year in review’ playlist, to ‘Your summer rewind’, Spotify create content that demonstrates the personalisation of their platform, without asking the user to do anything at all. They exemplify the possibility on offer, with a playlist to match every mood. And they’ve hinged their ad campaigns on this premise too.

At the end of 2020 Spotify rolled out their annual Wrapped campaign, an ode to the music and musicians who have pulled us – each of us – through a year of crisis. Tens of millions (60 million actually, in just the first week) of Spotify users logged in to analyse their personal stats – top songs, favourite genres, number of artists, all featured as part of the detailed report. In 2019, the campaign was unveiled by closing out the decade. Spotify enabled each user to look back on their last ten years of music, a premise so much more powerful than it might read on paper; jogging memories by their personal soundtracks. The campaign sparked conversations and created connection, a shared experience that no surprise, went viral. It made a splash offline too, with 5,100 unique billboards and other out-of-home ad placements running globally. And in true testament to their skill as a Creator brand, the fluidity between offline and online streamed seamlessly. The posters prompted users to the platform, and the success of the platform prompted people to take more notice of the posters. Everything, all of it, contributing towards enabling the consumer to create something that is at once, both shared and special.

At Glorious, we’ve shown a number of clients a more creative way of doing things. Ten Thousand Islands are a footwear brand who approached our team looking for a powerful brand position and a stand out visual. The client, who themselves had designed and produced footwear for international designer brands for over 20 years, had already coined the concept: multi-purpose summer shoe, ultra-lightweight, fully breathable and water friendly, that is as comfortable and practical during the day, as it is a fashion statement and stylish at night. Looking at how to communicate all these USPs into the brand identity, the design team began by pivoting all visuals and messaging towards the semantics of summer. This led to the creation of a brand mark based on a bisected graphic expression of the sun, and therefore unmistakably summer and alluding to the unique ‘day and night’ performance of the product. There followed photography, target market photo profiles and marketing messaging that expressed ‘the Sole of Summer’. And as with any good Creator brand, Ten Thousand Islands were able to position their product as the facilitator, the equipment for experience, the rest is up to the consumer to create. 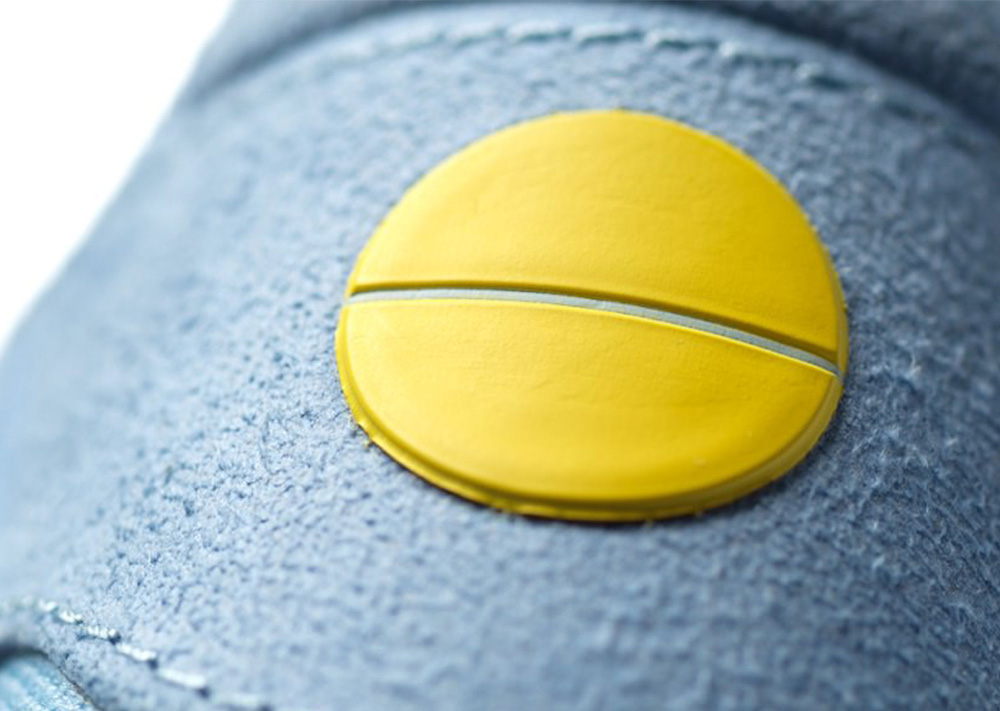 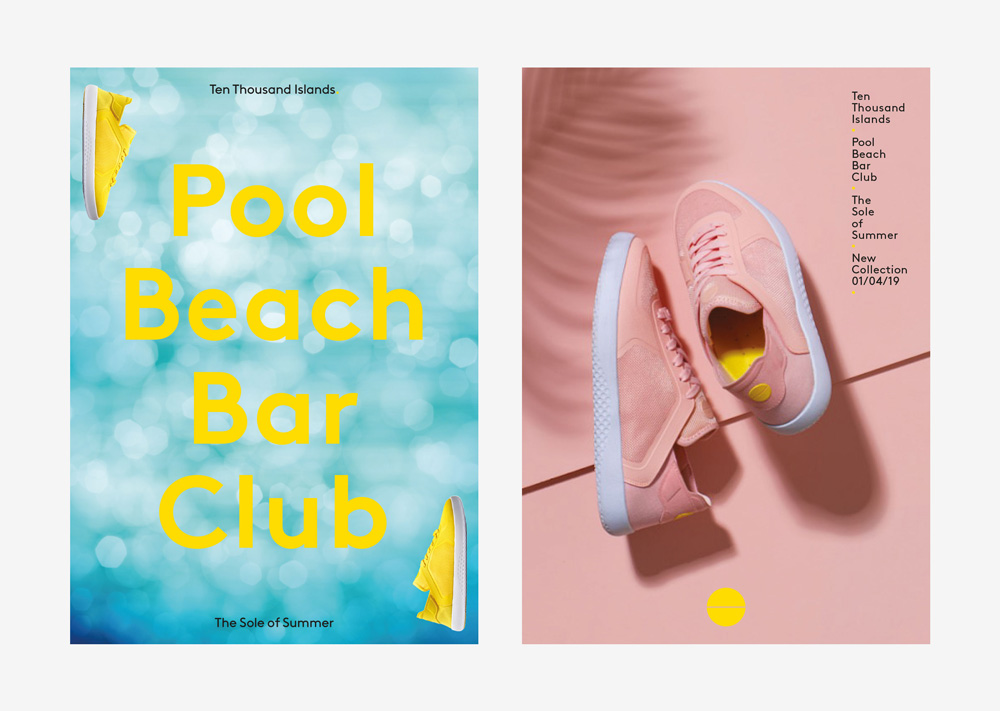 It’s a similar story for HarperNorth – the new imprint of HarperCollins, established in 2020 in Manchester. HarperNorth appointed the team here at Glorious to create the soon-to-be-launched imprint that would take pride of place on the spines of new publications written by northern talent, as well as across marketing channels such as Social, Display and their own website. It felt appropriate that for a client with so many different narratives, our approach too would be one with several proposed endings. So, after developing ten iterations of how the imprint might look, the concluding chapter was settled as a strong, bold and unique symbol, one that eludes to the north’s industrious and illustrious past. It was also visually aligned with the HarperCollins imprint – and whereas that alludes to fire and water – the new imprint alluded to the industrial nature of the north and the network or waterways. Exploiting the ‘h’ & ‘n’ character combination, the team created an ‘iconic’ symbol and it was also suggested by the client that the direction and axis of the strokes, on the symbol, were rather reminiscent of handwriting. Serendipity we felt, given publishing is rooted in the written word. In developing a logo simple in design and yet packed with meaning and symbolism, our team were confident that the final output was the right one to embolden writers and emboss a myriad of front covers.

Forming something so open and yet so focused is the power of Creator brands, the best of them make it possible for everyone to derive their own meaning and message towards a particular product or service. So, if we’ve left you feeling inspired to create, to brand a business loaded with possibility rather than straight answers, here’s our Creator brand starter-pack:

• Consider ways in which to tailor your brand proposition so that it’s filled with narrative and journey, one which allows the consumer to fill in the gaps with what the product or service might mean to them, what they could make possible.

• Use a Tone of Voice that instils a sense of awe and wonder. If you get it right, these superlatives won’t be empty words, but instead an embodiment of what your brand does and can do.

• For iconography, typography and illustration make it playful and fun – it should inspire and galvanise the audience to want to take action, to do. More than just about purchase, it’s about becoming a medium through which someone can create something: playful purpose, purposefully playful.

• For campaigns and ad content avoid spelling it out or over explaining. Instead, don’t be afraid to live by your namesake and get creative, think outside the box.

• Absorb and adapt, the best Creator brands don’t stand still for long. If there’s an idea, a change in consumer demand, an emerging trend, they respond to it, remould to better fit the climate…

…Just like LEGO have, pitching themselves a hygge brand during the pandemic – the Danish and Norwegian word for ‘a mood of cosiness and comfortable conviviality with feelings of wellness and contentment.’ Couldn’t we all do with a little more hygge?