Design is many things. More often than not it’s challenging, usually it’s fun, but it’s always different. Each project is unique and requires a different approach. That’s the whole reason I choose to study graphic design at university, for the diversity of it.

However, there’s still a lot I have to learn and having the opportunity to do a placement at Glorious Creative has definitely started me on the right track and shedding new light when it comes to understanding the key stages to good design.

1. Fill your brain, before you fill the page/ Research the life out of it

Much like writing this blog post, good design begins with a blank page. Getting past that first hurdle is always difficult, which is where research comes in. There aren’t actually as many differences between a real, working studio and university as I expected, it’s more just that the overall standard of everything you do skyrockets. At university you often research – but you don’t Research; you look into it, you read about it…but being able to spout endless trivia and fun facts won’t produce a good piece of design. Understanding it will.

If you don’t have a comprehensive understanding of all the what’s, where’s, why’s and how’s then you won’t be able to produce a meaningful, relevant and effective piece of design. That nugget of gold in all the noise. You might not even notice it’s there until you’re further into the project, but there’s little chance without solid foundations.

2. Don’t fear the drawing board

There’s always a fear in the design process of getting it wrong. Whether it’s something not being good enough, not working as well as you’d pictured, or just seeming like a silly idea. Having been in a branding and design agency for nearly two months now, that anxiety was definitely heightened by being an undergraduate in a room of fully-fledged designers with decades of experience between them. It’s easy to feel like the things you produce won’t be worthwhile, but it’s important to just bite the bullet and put your idea’s forward. The best thing you can do is try.

If you discount something you think of or produce – as a bad idea, you might miss its full potential or how it could be used differently. Rather than worrying about whether something is right or wrong, it’s better to just ask for help, because the people around you can lend their knowledge and experience and might just see something that you can’t.

This was a big one for me. A little bit of finesse goes a long way. Edit as you go. Kern your ones. It’s all about keeping your work tidy and well-made as early on as you can – that way you’re going to get a much better perspective of how the idea could look when finalised.

The degree of care that goes into everyone’s work here at Glorious Creative became clearer and clearer every day, as did the need for it in mine. It’s not something that is immediately obvious from an outside perspective, but every line is considered, each colour, typeface, the proportions and spacing; literally everything is tweaked and polished until a finished product is formed. The moral of that story for me personally is, when it comes to good design you’ll thank yourself for paying attention to little things. 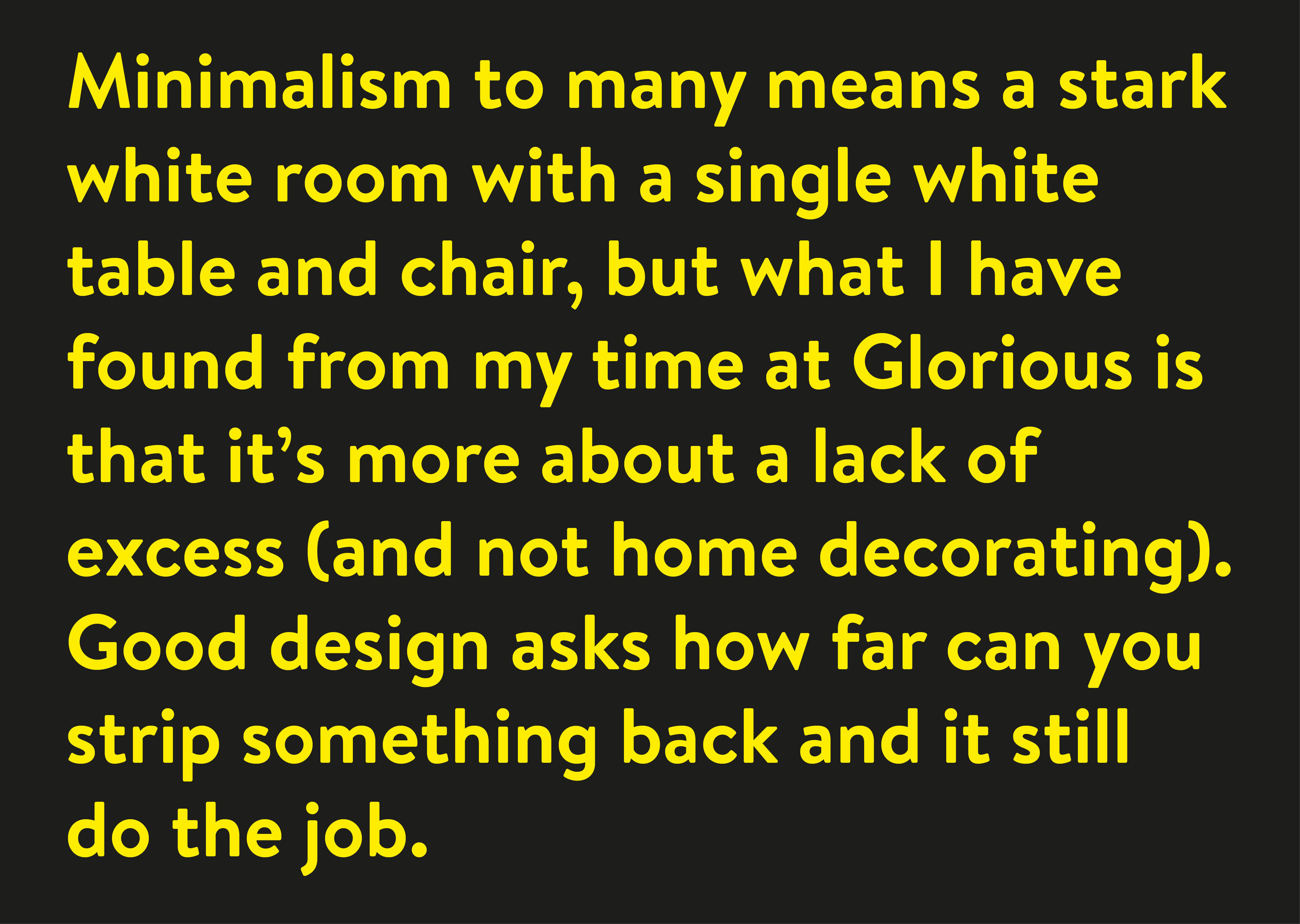 Minimalism to many means a stark white room with a single white table and chair, but what I have found from my time at Glorious is that it’s more about a lack of excess (and not home decorating). Good design asks how far can you strip something back and it still do the job? How pure can you get an idea?

It’s easy to over compensate in design, to drown an idea in extra context and embellishments in order to guarantee something works, however, you’ll get a better result by being confident in what you produce and understanding that people generally appreciate subtlety over being spoon fed the “ins and outs” of why it works. If an idea is strong, it will be able to stand on its own without having to build supports around it.

When working in an agency, beyond the physical resources the idea is that you are surrounded by other designers. There’s a habit among students to have a lone wolf attitude to design, because it’s your grade, you’re going to get it right even when group projects arise. But even when designing something by yourself, it’s a waste to wall yourself off from others. A “can’t see for looking” situation always lurks around the corner and if something feels off it can often be the little things that are easy to miss when you’ve been staring at something for hours. That’s why it’s really important just being able to ask someone to check something for you. A second opinion could make a big difference to your work. While living in your own head will eventually get old, just being able to bounce ideas around will yield something more interesting than you might have been able to create on your own, or simply fill a gap that you didn’t know needed filling.

If you’re like me, asking for help can be intimidating but there is never any harm in it. From the big fish, to the small, being open to the world around you (and the people) will mean gaining a fresh perspective that can ultimately help to enrich the overall results.

Looking for help with creative and content design? Talk to one of our designers about your project.